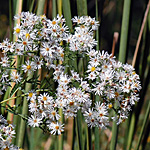 White Panicle Aster is a native erect perennial aster that grows to 5 feet in height, stems are stout, grooved, and which can have fine hair, especially near the top, in the grooves of the stem.

Leaves: As the species name and the alternate common name implies, the leaves are lance-like, very linear, up to 6 inches long. They are smooth and entire on the margins or with a few small teeth, and are stalkless (sessile) or somewhat clasping. Largest leaves are near the center of the stem. Dead leaves remain on the stalk for a time and are noticeably curled. Lowest leaves fall off at flowering time (however, in Minnesota during moist cool years, most leaves remain green well into the flowering period).

The floral array is an open spreading, branched panicle with ascending branches (which shape yields the current common name) of small white flowers. The flowers occur on all sides of the branches, unlike the Side-flowering Aster, Symphyotrichum lateriflorum, where the white flowers are in one plane on the panicle branches.

Flowers: Heads are up to one inch wide, but usually 1/2 to 3/4 inch, consisting of two types of flowers: The outer ring of 17 to 47 ray florets (with spreading rays that are usually white) which are pistillate and fertile and which surround 16 to 38 tubular disc florets which are bisexual and fertile. The disc florets have whitish to yellowish corollas, turning reddish to purplish at maturity, similar to many of the asters in this genus. The five corolla lobes are mostly erect or may bend outward slightly when the floret opens. Anthers of the five stamens tightly surround the style which, which has appendages at its tip. The style is exserted from the corolla throat when the floret opens. The phyllaries around the outside of the flowerhead are in several series, linear, the outer series 1/3 to 1/2 the length of the inner series. These have dark green center stripes. Below the flower head are 1 to 3 small bracts that do not grade into the phyllaries.

Seed: Fertile flowers mature to a 4 to 5 nerved dry cypsela, 0.5 to 1.6 mm long, with a whitish pappus attached for wind dispersion. These seed heads are rounded and look like small dandelion seed heads. Seeds are very light, about 150,000 to the ounce and will germinate in a warm location, usually without the need for cold stratification.

Varieties: Four varieties of of the five recognized varieties of S. lanceolatum are reported for Minnesota, the variety listed above plus var. hisperium, var. hirsutiicaule, and var. interior. Differences between the first and the next two are in the phyllaries. The next two have differences in the stem. The 4th variety, var. lanceolatum has a difference in the number of flower heads and is considered the most northern of the varieties in North America and the most prevalent within Minnesota. (See Ref. #28b and 28c for distribution and W7 for details of the differences.)

Habitat: The plant grows from a rhizome with fibrous roots and forms colonies in moist low areas that can be in open woods or full sun if the soil is moist. Soil does not have to rich. It attracts butterflies, moths, and bees. This was a common tall grass prairie plant.

Names: Like most new world asters, it has undergone a series of scientific name revisions. It was once Aster paniculatus in Eloise Butler's time, and sometimes Aster lanceolatus, then Aster simplex. All the new world asters, formerly in the genus Aster, have now been reclassified, most into the genus Symphyotrichum. The genus name is from the Greek symphysis, for 'junction', and 'trichos', for 'hair' and, while obscure, it was first applied by Christian Gottfried Daniel Nees von Esenbeck in the 1800s in describing the type aster for the genus. The species lanceolatum means 'spear shaped' and refers to the leaf shape. The author names for the plant classification are as follows: The first to classify was ‘Willd.’ which is for Carl Ludwig Willdenow (1765-1812), German botanist, a founder of the study of the geographic distribution of plants. His work was amended by ‘G. L. Nesom’ is for Guy L. Nesom (b. 1945) American botanist who has published papers on the nomenclature of asters. 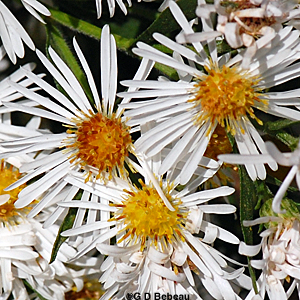 Above: The flowers of White Panicle Aster have 17 to 47 ray florets (usually white) surrounding 16 to 38 disc florets that are whitish to yellowish, turning reddish to purplish at maturity.

Below: The floral array is an open spreading, branched panicle 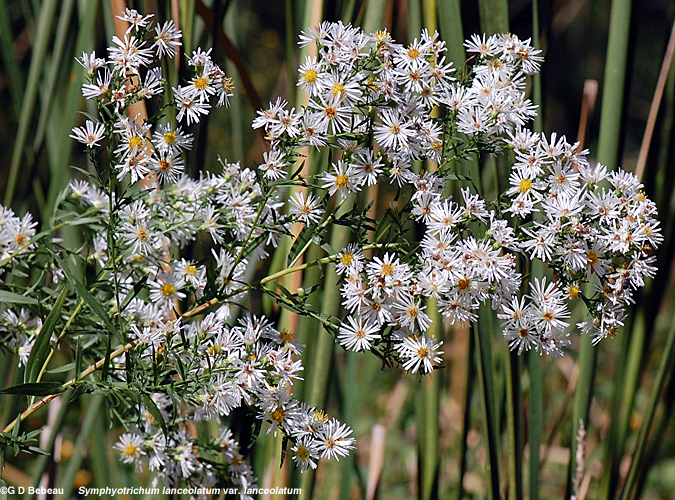 Below: 1st photo - The stem has noticeable grooves and leaves are sessile or slightly clasping. 2nd photo - the longest leaves are at mid-stem, usually with smooth margins. 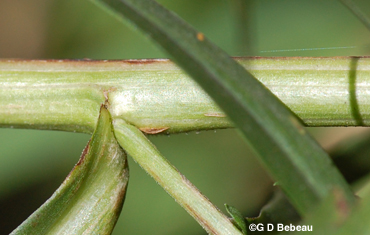 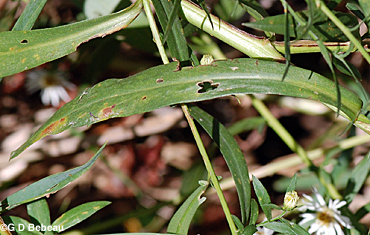 Below: 1st photo - The phyllaries of the flowerhead are in several series, linear (4-6 mm long) with dark green centers. Below them on the stalk are 1 to 3 small leaf-like bracts. 2nd photo - Stem leaves are longest at mid-stem, may have a tooth or be entire. 3rd photo - A characteristic of this species is that dead leaves on the stem assume a spiral curl. 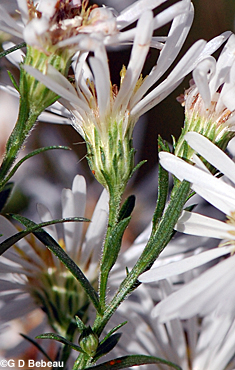 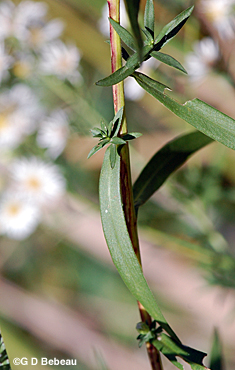 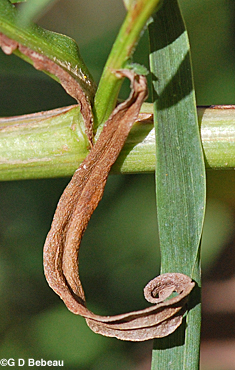 Below: The seed is a dry flat cypsela that has a tuft of hair for wind dispersion. These seed heads are rounded and look like small dandelion seed heads. 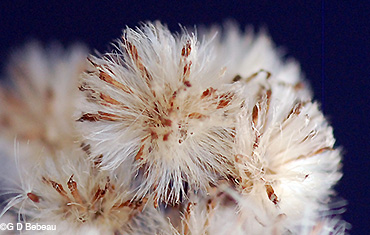 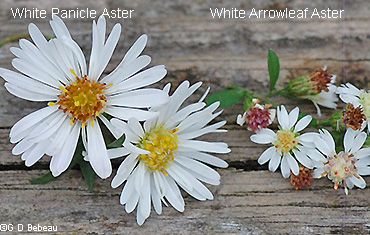 In North America White Panicle Aster is found in Canada from Alberta to the east coast and in the U.S. from the Great Plains eastward to the coast, with only Alabama, Georgia and Florida excepted. Within Minnesota it is found in all but 15 counties and most of the exceptions are in the SW quadrant. Asters are difficult to study. There are twenty-four species just of Symphyotrichum listed by the DNR and the U of M Herbarium as being found in Minnesota, some, such as this species, with several varieties.

Eloise Butler in her 1915 report to the Board of Park Commissioners wrote about the asters in the Garden and of this species she wrote: "Aster paniculatus [see name notes above] is often mistaken for Boltonia in the distance. The inflorescence, however, is not flat-topped like that of Boltonia, and the disc-flowers are of a deeper color. This aster is highly decorative, growing as it does in large masses." Much the same text was incorporated into an essay that was sent to The Gray Memorial Botanical Chapter, (Division D ) of the Agassiz Association for publication in the Chapter's circular. Text here.