Pale Smartweed is an extremely variable species with over 2 dozen different types described from the Old World and the New World. Flora of North America (Ref. #W7) suggests this is excessive and many former species and subspecies are not included within this classification. Pale Smartweed is a native annual, growing on ascending to erect stems from 2 to 5 feet high, sometimes branched. Stems are usually smooth with barely noticeable ribbing, but some plants may, at the upper end of the stem, have appressed hairs or very stubby glandular hairs.

The leaves are alternate on the stem, narrowly to broadly lance-like, entire margins which are usually slightly rough with antrorse hairs, smooth on top, except the central vein may be rough, with the underside either smooth or with fine hair or glandular dotted. The leaf has a tapering to wedge shaped base ending in a short stalk, and tapers to a pointed tip. They may be a darker colored triangular or moon shaped splotch on the upper surface (but this is not as common as it is on P. maculosa). Leaf stalks terminate in an ocrea (a sheath surrounding the stem) that is brownish to reddish, cylindrical with the base inflated. It is usually smooth but may have fine bristles up to 1 mm in size at the margins. Ocrea turn brown with age and drop away. Leaves are 4x as long as wide and may be up to 8 inches long.

The inflorescence is usually a terminal spike of densely packed small flowers. The spike is mostly arching to nodding, from 1+ to 3+ inches long, but only 3/16 to 7/16 inches wide. It is usually not interrupted. They may also be spikes from the upper leaf axils. Spikes also have an ocrea that is often glandular or with fine bristles. Stalks of the spikes are up to one inch long and usually with short glandular hair.

The flowers on the spike are in clusters (fascicles) of 4 to 14. Each flower has a greenish-white to pink perianth. Petals and sepals are combined as tepals. These number 4 or 5 are are connected for part of their length. Tepals are divided between inner and outer, the outer usually 2 or 3, are somewhat ovate to elliptic in shape and with veins that are prominently divided at their tips, looking like anchors. A lens may be needed to see the veins in some cases. Inner tepals are hard to see. The flowers are bisexual, with 5 to 6 stamens, anthers may be whitish at first turning to pink to red at maturity; styles number 2, sometimes 3, and are united at their bases.

Seed: Fertilized flowers produce a brown to black achene which can be shiny or dull, flat to concave on both sides. Seed size ranges from 1.5 - 3.2 mm long by 1.6 - 3 mm wide. The plant re-produces by re-seeding.

Habitat: Pale smartweed has a fibrous root system without rhizomes or stolons. It grows best in wet to moist areas, usually in disturbed grounds where there is full to partial sun. It can be an aggressive spreader when other vegetation is lacking.

Names: The genus Polygonum has been divided into several genera, one of which is Persicaria. The former name for this plant, assigned by Linnaeus in 1753, was Polygonum lapathifolium. The current genus, Persicaria is from the Latin meaning 'peach-like', derived from persica for 'peach' and aria, meaning 'pertaining to', and thought to be referring to the leaves being similar to one of the peaches. The species name, lapathifolia is also from the Latin and means 'with dock-like leaves', referring to the leaves of the Dock plant, and is of course, in somewhat conflict with the meaning of the genus name.

The author names for the plant classification are as follows: First to classify was '(L.)' which refers to Carl Linnaeus (1707-1778), Swedish botanist and the developer of the binomial nomenclature of modern taxonomy. His work was amended in 1822 by ‘Gray’ which is for Samuel Frederick Gray (1766-1828) British botanist and pharmacologist whose most important work was a Supplement to the Pharmacopoeia in 1818 and The Natural Arrangement of British Plants in 1821.

Comparisons: While the smartweeds are extremely variable, the most confusing Persicaria species is P. pensylvanica, the Pennsylvania Smartweed, where the inflorescence looks similar, but is shorter, erect, and the tepals do not have the veination of P. lapathifolia. Another member of the genus found in Minnesota that has arching inflorescences is Dotted Smartweed, Persicaria punctata, but there the inflorescence is interrupted and the ocrea has bristles. Other examples of Persicaria are P. amphibia, Water Smartweed; P. maculosa, Spotted Lady's-thumb; P. sagittata, Arrow-leaved Tearthumb.

Above: The inflorescence with nodding spikes. Drawing from Britton, N.L., and A. Brown. 1913. An illustrated flora of the northern United States, Canada and the British Possessions. 3 vols. Charles Scribner's Sons, New York.

Below: 1st photo - The flowers of Pale Smartweed. 2nd photo - detail of the veining on the tepals. Note the divided tip of veins curving backward like an anchor.

Below: 1st photo - the upper surface of a leaf. 2nd photo - the underside of a leaf - note the antrorse (curving forward) short rough hairs on the margin.

Below: Three examples of the leaf orcea at various stages of development. 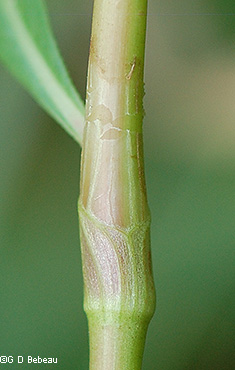 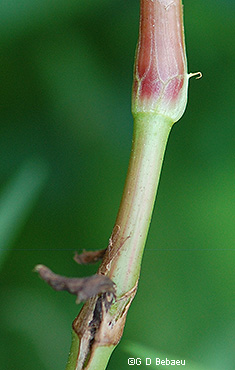 Below: Drawing of the seeds of Pale Smartweed.

Below: An example of a plant with pinkish flowers. 2nd photo - the ocrea of the inflorescence.

Below: A grouping of Pale Smartweed.

Pale Smartweed is indigenous to the Garden, Eloise Butler recorded it on Sept. 6, 1907, using the classification of her time - Polygonum lapathifolium. She also brought in more plants in the fall of 1914 from a spot in Glenwood Park (which surrounds the Garden). Pale Smartweed is found throughout the state of Minnesota, absent in only six of 87 counties. It is considered native and found in all the lower 48 states of the U.S. but is considered introduced into Canada where it is also known throughout except for the far arctic regions. It is one of 12 species of Persicaria in Minnesota, 3 are introduced, 9 are native. All but two are found in Hennepin County and one of those two, Persicaria careyi, is on the Special Concern list as it was last collected in 1940.