Trees and Shrubs of the Eloise Butler Wildflower Garden 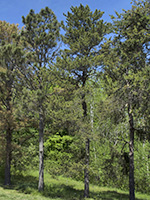 Garden Location
Outside of Garden, SE of front gate

Jack Pine is a native medium size evergreen conifer, reaching 15 to 65+ feet in height (larger in Canada) with a trunk that can be straight or crooked, the crown irregularly rounded or spreading as the branches can be spreading-ascending or descending. They are poor at self-pruning. Old trees frequently look like they have been wind damaged or struck by lightning. See note under "Habitat" for the record tree in the U.S.

Twigs are slender, similar in color to the bark, but becoming more rough and grayish-brown with age. Buds are ovoid, reddish-brown, resinous and unlike the Red Pine the scale margins are almost entire (few, in any, fringes).

The needles (leaves) are two per cluster (per fascicle), 3/4 to 1-1/2 inches long, pointed tips, yellow-green in color with fine stromatal lines (pore bands). A lighter color fascicle sheath remains at the base of the pair. They usually have a slight twist and diverge from each other, and persist on the tree for 2 to 3 years.

Flowers: The tree is monoecious, that is, male and female flowers are separate and in this species they develop on separate branches. Male flowers are yellow-green, cylindrical in shape, 1/2 to 3/4 inches long and appear in clusters at the branch tips at the base of the current years growth. These elongate when the pollen is ready for release and are then covered with yellow pollen. Female flowers develop in the middle or upper branches and are an oval short cone of reddish color.

Seed - Cones: The almost stalkless cone is 1-1/2 to 2 inches long (an elongated oval), held in an up-curved position pointing to the tip of the branch, green initially then light brown in color turning gray with age. At maturity the cones become ovoid in shape as the scales open. Cones mature in 2 years and may persist on the tree after that. Some cones open and shed seed soon after cone maturity (non-serotinous) while others are sealed shut by a resin and known to hold seed much longer, only opening and shedding seed with age or via fire (serotinous). A protuberance on the outside of the cone scale has a small prickle. Trees must be about 5 years old to produce seed. Seeds are the smallest of the native pines and have small wings.

Habitat: Jack Pine does well on acidic, dry and sandy sites, but accepts more moist sites if well drained. It develops a tap root. It is susceptible to a number of diseases, such as the Sweet Fern Blister Rust (Cronartium comptoniae) which is hosted on the Sweet Fern, which is found in Minnesota's NE quadrant where Jack Pine exists. There is also the Jack Pine budworm (Choristoneura pinus) which defoliates trees. The tree is smaller and shorter lived on harsh sandy sites but a 243 year old specimen has been found in the Boundary Waters Canoe Area of MN. [1973 - US Forest Service Report] Voyager's National Park in Northern Minnesota is home, as of 2018, to the current Champion Jack Pine in the United States with a height of 73 feet and a trunk girth of almost seven feet.

Names: The genus Pinus is the Latin name for the pine tree. The species name, banksiana, is an honorary for Joseph Banks (1743-1820) English naturalist and botanist, who was leader of the scientific group on James Cook’s first voyage around the world on the Endeavour. He introduced eucalyptus and acacia to the western world and became president of the Royal Society in 1778. The author name for the plant classification, 'Lamb.’ refers to Aylmer Bourke Lambert (1761-1842) British botanist, early member of the Linnean Society, and whose best known work is A description of the genus Pinus in volume 1 of which this species was published in 1803.

Comparison: The closest pine that compares to P. banksiana is the Scot's Pine, P. sylvestris, because the needles are also in pairs and of similar length, however Scotch Pine has cones that are reflexed on the branch not pointed to the tip of the branch as are those of Jack Pine. Jack Pine will hybridize with Rocky Mountain Lodgepole Pine, P. contorta var. latifolia. 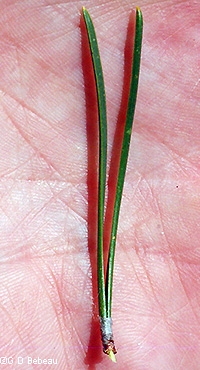 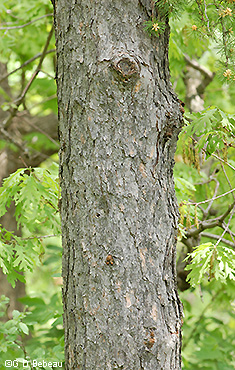 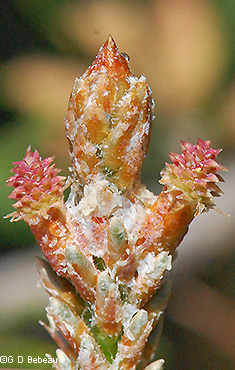 Above: 1st photo - Needles are in pairs per fascicle, 3/4 to 1-1/2 inches long. 2nd photo - Bark on trunks is scaly with orange to reddish-brown overtones. 3rd photo - Buds are very resinous. 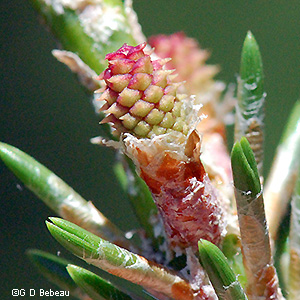 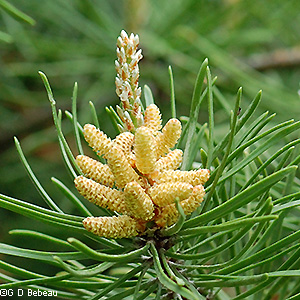 Below - Groups of male flowers appear in the lower branches. 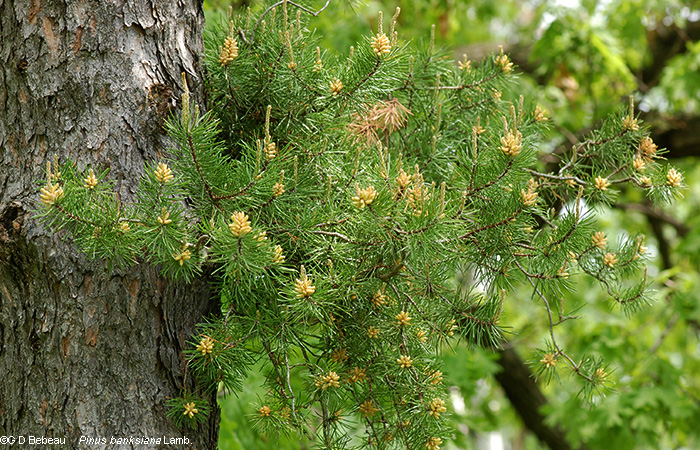 Below: 1st photo - Twigs and small branches have scaly gray bark also, except for new growth which is reddish. 2nd photo - Areas of needle growth are orange to reddish brown. Each needle pair has a light colored sheath at the base. 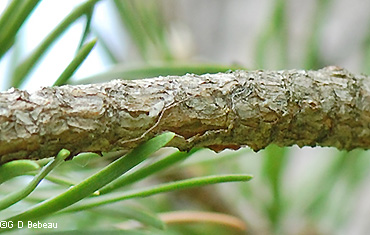 Below: 1st photo - New cones are green, these turn gray (2nd photo) in late season and when they mature (3rd photo) the 2nd year the scales begin to open. 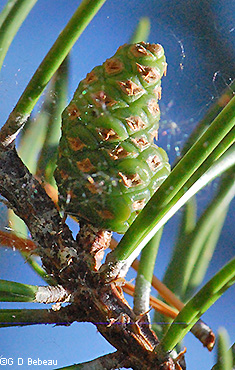 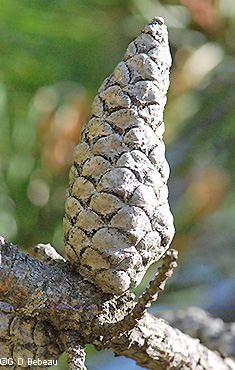 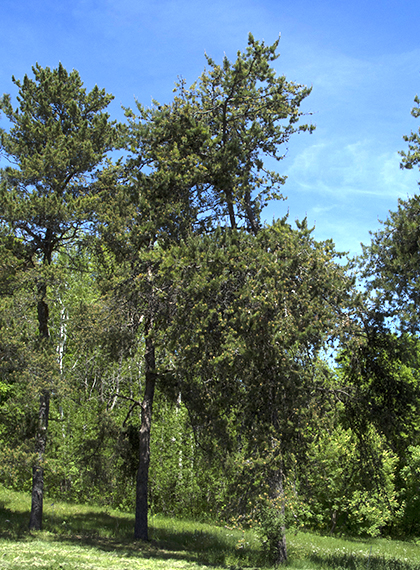 Jack Pine is not indigenous to the Garden or to Hennepin County. Eloise Butler planted the tree in 1910, 1911 and 1914. Eloise imported her first ones in 1910 from Kelsey's in Mass. but in the later years the Park Board Nursery was growing them and she sourced them there. By the time of Martha Crone's 1951 Garden census the tree was no longer listed as being in the Garden. However a mature specimen grows along the trail near the parking lot, southeast of the front gate. Jack Pine is a conifer of the northern forests, found in most parts of Canada, but in the U.S. only in the northern states bordering Canada from North Dakota eastward, some other states near the Great Lakes and the New England area. It is the dominant tree in southern boreal forests. In Minnesota it is found generally north and east of a diagonal line drawn from Washington County Northwestward to Otter Tail and Polk. It is also known in several SE Counties.

There are three species of Pine native to Minnesota: P. banksiana, Jack Pine; P resinosa, Red (or Norway) Pine; and P. strobus, White Pine. The Scot's Pine, P. sylvestris, native to Europe has been introduced for landscape planting and for Christmas trees.