Garden Location
Not known to have been in the Garden

The Penstemons are the 3rd most prolific genus in North America. Also known as beardtongues, they usually have 3/4 to 2 inch long trumpet shape flowers with flaring lobes, five stamens and specifically the flower throat is open with a flat base. Flowers are in clusters atop the stem.

Pale Beardtongue is a native erect perennial forb growing on hairy stems from 8 to 28 inches high. Stems are unbranched, green but can also have some purplish tones.

The leaves are both basal and stem and variable. Stem leaves are opposite, in 4 to 8 pairs, very hairy with entire edges and touch the stem, appearing as one leaf pierced by the stem. They are lance shaped with pointed tips and one prominent central vein. Basal leaves form a rosette of stalked leaves, sometimes remaining green overwinter. These are usually with coarse or wavy teeth on the margins and not hairy like the stem leaves.

The inflorescence is considered to be an interrupted thyrse, that is, a branched inflorescence in which the main axis is raceme like but with lateral branches like cymes, a structure where each branch ends in a flower. The cymes are 2 to 8 flowered, on 4 inch long ascending branches, placed 2 per stem node and arise from opposite bracts on the stem, looking somewhat like a whorl, but actually a structure known as a 'verticillaster' and most prevalent in the Mint family. The entire inflorescence forming a cone shape atop the stem. All branches of the inflorescence are sparsely to densely glandular-hairy.

The flowers are 5-parted, 1/2 to 3/4 inches long, tubular to tubular-funnelform in shape with a white corolla that has wide flaring lips. The upper lip has two rounded lobes and the lower lip has three. The base of the corolla is somewhat flat and this one has rosy-purple fine veins on the interior, which are nectar guides. The upper lip has a central ridge on top. The green calyx has 5 short triangular pointed lobes (3-5 x 1-3 mm) that flare outward at the tips. Inside the corolla, there are 5 stamens and a white style. The style, with an enlarged stigma, and four of the stamens, in pairs of different length, are appressed to the upper part of the corolla tube while the fifth degenerated stamen (a staminode) lies at the base of the tube, sticks out and is slightly hairy at the tip. A patch of yellowish hair covers the inside of the lower corolla middle lip. Flower stalks, outer surfaces of the corolla and the calyx are glandular-hairy.

Seed: Fertile flowers produce a dry ovoid sharply pointed seed capsule, 5 to 7 mm long, containing numerous irregular shaped loose dark-brown seeds. Seeds are wind distributed and the plant can self-seed. Capsules may remain overwinter on the stem. Seeds need 30 days of cold stratification to break dormancy. If stratified, plant when the ground is cool - early spring after the last hard frost or in the fall and let winter take care of the dormancy period. They are very small - 180,000 to the ounce.

Habitat: Pale Beardtongue grows from a rhizomatous root system that has a woody caudex. Plants will form larger clusters via the root system. It requires drier well drained soils - particularly sandy or sandy loam with full sun to part shade. Moisture - mesic to dry. Like many Penstemons, over-watering will cause root-rot. Divide plants in the spring before new growth.

Names: The genus Penstemon is from the Greek pente, or "five," and stemon, refers to "stamen." The species name pallidus, means 'pale' referring to the flower color. The author name for the plant classification, ‘Small’ is for John Kunkel Small (1869-1938), American Botanist, first curator of the New York Botanical Garden, best known for Flora of the Southeastern United States. Penstemons used to be in the Figwort (Scrophulariaceae) family but contemporary Botanists have now placed the Penstemons into the family Plantaginaceae. The name 'Beardtongue' refers to the hairy tip of the sterile stamen that is visible in the corolla. 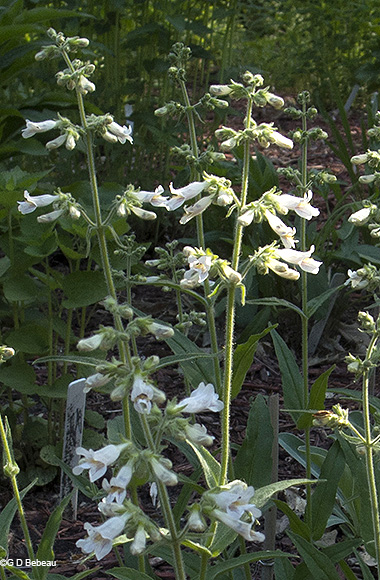 Above: The inflorescence. Note the whorl-like arrangement of the verticillasters. Drawing by Britton, N.L., and A. Brown. 1913. An illustrated flora of the northern United States, Canada and the British Possessions. 3 vols. Charles Scribner's Sons, New York.

Below: 1st photo - Flowers appear in many 4+ inch long ascending clusters of stalked flowers (cymes) rising from opposite bracts. 2nd photo - The base of the corolla is somewhat flat and this one has rosy-purple fine veins on the interior, which are nectar guides. 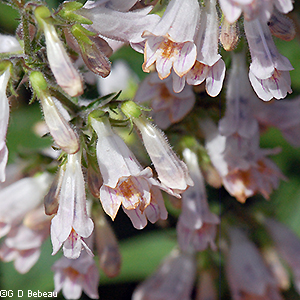 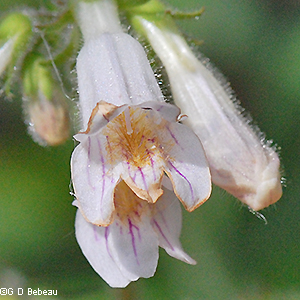 Below: 1st photo - A single flower cluster. Note the pair of green bracts at the base of the cluster- there are also a pair of bracts at the stem from which the cluster stalk rises. All parts of the inflorescence are glandular hairy including the outer surface of the corolla. 2nd photo - The stem leaves are opposite and touch the stem. They are hairy with entire edges. 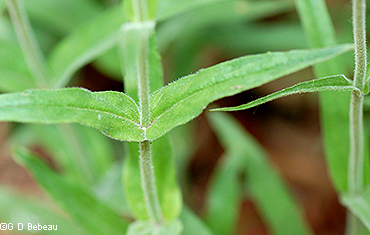 Below: 1st photo - The rhizomatous root with woody caudex. 2nd photo - The basal rosette in the spring. 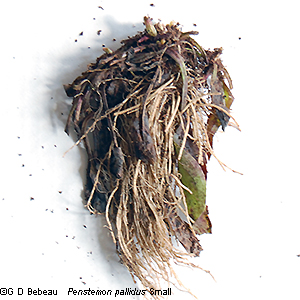 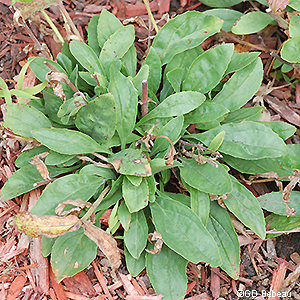 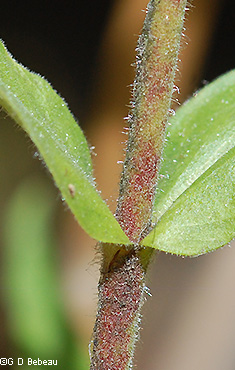 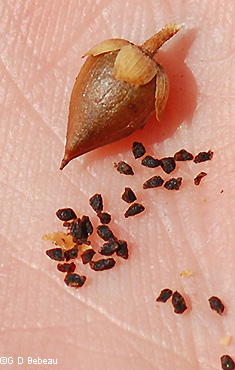 Below: The style, with an enlarged stigma, and four of the stamens that are true are appressed to the upper part of the corolla tube. The lower middle lip has a patch of yellow hair. 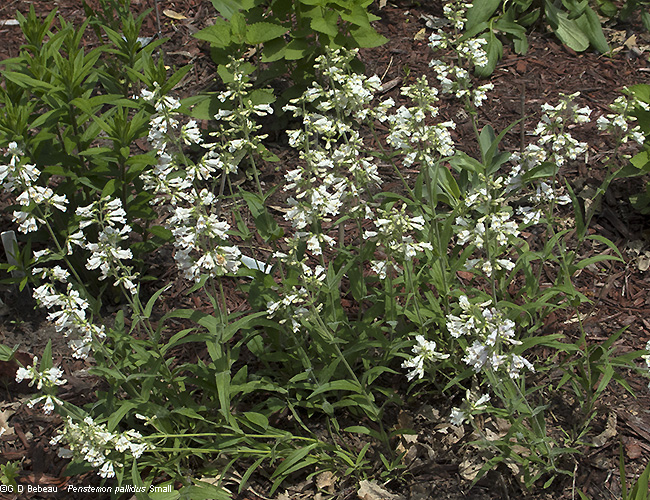 Notes: Pale Beardtongue is found in the eastern half of the the United States and Ontario in Canada. Within Minnesota it is considered native but is found in only St. Louis and Lake Counties and is on the DNR "Watch" list.

Lore: There is a minor amount of literature on native use of this plant for medicinal purposes. Moore (Ref. #30) reports that fresh parts of most penstemons can be used to make a good salve. Others report the leaves have been used for a poultice for snake bites.