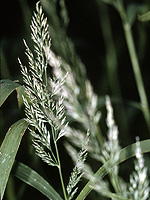 Marsh Muhly is a native perennial grass that grows from 1 to 3.5 feet high on stiffly erect stems (culms) that are light green in color and smooth with shiny nodes, and much branched above the middle.

Leaf blades are up to 7 inches long and narrow (only 2.5 mm) , flat and dark green, rough on the surface. They are alternate and ascending.

Sheaths and Ligules: Sheaths are long and open. Ligules are truncate, membranous, and 0.6 to 1.5 mm long.

The inflorescence is a spike-like panicle up to 6 inches long but only up to 1/2 inch wide. The panicle has dense appressed branches before fruiting.

Spikelets are 3 to 8 mm long, with a single floret. Glumes are subequal, 3 to 8 mm long including a short awn. Glumes are 1-veined, 1.3 to 2x the length of the lemmas, smooth surfaced or slightly rough at the tip end. The lemmas are 2.2 to 3.8 mm long, with short hairs on the lower parts and may or may not have awns but if so they are short - to 1 mm. There are 3 anthers, yellowish in color.

Habitat: Marsh Muhly Grass is a warm season perennial growing from rhizomes, which are long and scaly. It grows on somewhat moist sites as the common name implies, but is also found on field edges, railways and roadsides. There are about 15 Muhly grasses that grow in the Great Plains, most of which prefer drier habitats. This one prefers full sun and a moist soil. Growing by rhizomes, it is able to from dense colonies, but it does not form clumps. It is palatable for grazing animals when young but is usually not a grass considered for forage.

Names: The genus name, Muhlenbergia, is an honorary for Gotthilf Heinrich Muhlenberg (1753-1815) a U.S. citizen and German educated botanist who produced several catalogues of plants after retiring as a Lutheran pastor. The species name, racemosa, refers to the flower head being raceme - like, that is the individual flowers are stalked to a single central stem - in this case - the branches of the panicle are the racemes.

The author names for the plant classification are as follows: The first to classify was ‘Michx.’ which refers to Andre Michaux (1746-1802), French botanist who made many exploring expeditions in the U.S. collecting and cataloging many species. Two important works of his are the Histoire des chênes de l'Amérique septentrionale (1801 - Oaks of North America), and the Flora Boreali-Americana (2 vols., 180, published posthumously and contained the description of this plant). His son Francois, traveled with him and the father’s notes were later used for the 3-volume North American Sylva.

Comparisons: M. racemosa is similar to M. mexicana with which it can cross. However, M. racemosa is most similar to M. glomerata and some references group the two, however, there are distinct differences - M. glomerta has dull stem internodes with extremely short hairs and the stems are rarely branched above the base. Ligules are shorter 0.2 to 0.6 mm long whereas M. racemosa has ligules of 0.6 to 1.5 mm. A drawing comparing the details of the two Muhlenbergia species found in the Garden is shown below - M. mexicana and M. racemosa. 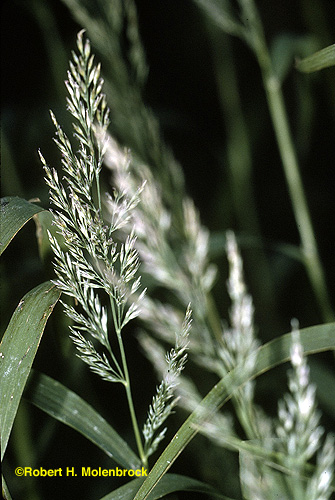 Above: The flowering raceme with maturing spikelets. Note the individually stalked spikelets. Photo ©Robert H. Molenbrock, USDA-NRCS PLANTS Database. Drawing from Britton, N.L., and A. Brown. 1913. An illustrated flora of the northern United States, Canada and the British Possessions.

Below: 1st photo - An example of the flowering racemes held above with the flat curving leaf blades on the upper stem. 2nd photo - A flowering head emerging from the leaf axil. Both photos ©Emmet J. Judziewicz, University of Wisconsin. 3rd photo - the tall but narrow spike. Photo - Kenneth J. Systma, Wisconsin Flora. 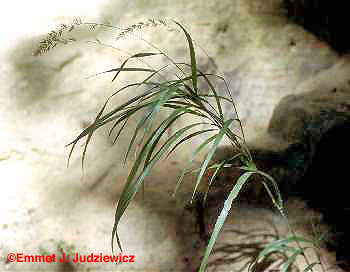 Below: A drawing comparing the details of the two Muhlenbergia species found in the Garden. Drawing by Linda A. Vorobik and Annaliese Miller, ©Utah State University.

Marsh Muhly Grass covers most of the United States and the lower Canadian Provinces. It is absent in most of the SE States but is most prominent in the north central states, extending west into the Rocky Mountain areas. In Minnesota it is found throughout the state in about 2/3rds of the counties with the exceptions widely scattered.

It is one of ten species of Muhlenbergia found in Minnesota. One other was reported, but never collected. Only two of those ten species, M. racemosa and M. mexicana, Mexican Muhly, are found in the Garden.