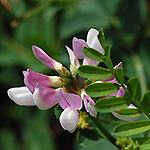 Garden Location
Not in the Garden. On Minnesota invasive non-native terrestrial plant list.

Crown Vetch is an introduced invasive perennial that grows on partially erect to reclining and trailing stems that can be up to six feet long when trailing and about 1 to 2 feet tall when erect. Multiple stems arise from the roots. Tendrils are lacking but the plant can climb by twining of the stem around objects.

The leaves are alternate and compound with an odd number of leaflets, usually 11 to 25, on the leaf stem, which is stalkless. Leaflets are oblong, about 1/4 x 3/4 inch, smooth margins, hairless and the tip has a little point - a projection of the midvein. Leaves are without tendrils.

The inflorescence is a round dense flat-topped umbel of 10 to 25 flowers on a long stalk rising from the leaf axils and held above the leaves. From the top the flowers resemble a whorl.

The flowers are 5-parted with the calyx having 5 pointed lobes. The base of the calyx is green with the lobes shading to pinkish. The 5 petals are pink to white arranged in a pea-like manner with the upper petal forming the banner (standard) - the deepest pink colored petal; two lateral petals which project forward and partially enclose the two petals forming the keel - both laterals and keel petals are usually white. The keel petals house the stamens and pistil. Each flower has a very short pinkish stalk.

Seed: The mature flowers produce a long linear brown seed pod, up to 2 inches long with a beak at the end. The pod is 4-angled and segmented. Each segment contains an individual seed that is brown and oblong, about 4 mm long, dropping from the pod when it splits open. Seed remains viable in the ground for 15 years.

Habitat: Crown Vetch grows from a branched root system with fleshy rhizomes from which it spreads and forms dense colonies. It grows well on low-fertility sites but needs moisture and sun. If forms nitrogen in the roots and the dense growth, which stabilizes the soil, also makes it invasive.

Names: The genus name Coronilla is derived from the Latin corona, meaning 'a crown' and refers to the appearance of the flat-topped whorl of flowers. The species, varia, means 'diverse' or 'differing' and is obscure. The author name for the plant classification - 'L.' is for Carl Linnaeus (1707-1778), Swedish botanist and the developer of the binomial nomenclature of modern taxonomy. In some references this species will be classified as Securigera varia (L.) Lassen, but that is not an accepted current name.

Comparison: The flower cluster of pea-type flowers resembles that of Birdsfoot Trefoil, Lotus corniculatus, but there the flowers are yellow and the leaf is 5-parted, not a long leaf with many leaflets. Those many leaflets and pinkish flowers may also resemble American Vetch, Vicia americana or Veiny Pea, Lathyrus venosus, both of which have tendrils and are not invasive.. 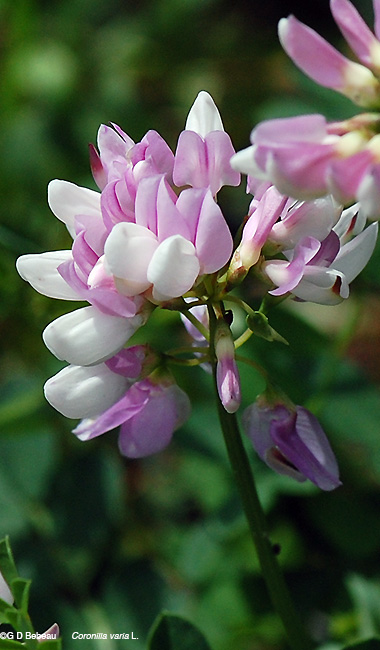 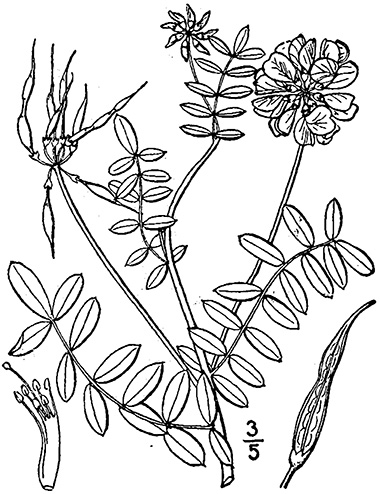 Above: The inflorescence is a dense rounded, somewhat flat-topped umbel head on a long stalk above the leaves. Drawing from Britton, N.L., and A. Brown. 1913. An illustrated flora of the northern United States, Canada and the British Possessions. 3 vols. Charles Scribner's Sons, New York.

Below: 1st photo - From above the inflorescence forms a whorl. Flower stalks are pinkish and the upper side of the calyx is pinkish. 2nd photo - Fertile flowers produce a thin, 4-angled segmented seed pod which splits open when mature. 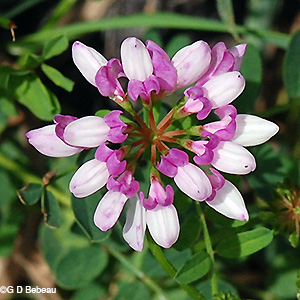 Below: Flower detail. 1st photo - The upright banner petal is pink, the two laterals are white and come together on the top, but under (2nd photo) are open, exposing the two keel petals which are tight together. Note also the short light green calyx, with 3 pointed teeth visible on the underside, shading to yellow-green on the bottom and pinkish on the top as seen above. 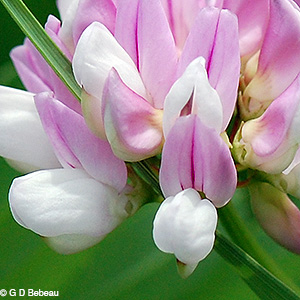 Below: The leaf is long, with 11 to 25 leaflets, each with a small point on the tip. The leaf stem is also angled. The leaf is considered stalkless as the last pair of leaflets are right where the leaf attaches to the stem. See photo further below.

Below 1st photo - the last pair of leaflets are right where the leaf attaches to the stem.

Notes: Crown Vetch was brought in from the Mediterranean region to be used for animal fodder and then for erosion control. As animal fodder it is palatable without a bloat hazard. It works wonderfully for erosion control. The dense mat formed by the plants prevents any other plant from growing and as it spreads it wipes out other native vegetation. While now listed on the "Minnesota invasive non-native terrestrial plant list", it was for years used by the Minnesota Dept of Transportation for erosion control on roadside cuts. One can now see how these plants have formed dense mats and obliterated anything in their way as they spread. The seeds have hopped the roadsides and now appear in numerous unintended areas. It is considered to be a serious threat to prairie and dune areas. Crown Vetch can be controlled by continued burning or cutting (which also destroys desired plants) or by spot herbicide application.

Crown Vetch is now found throughout North America except the Canadian far north and Alaska. Within Minnesota it is found in a number of counties, but the list is incomplete when considering the road cut use for erosion control. For example - it is not listed as present in Goodhue, but here are dense mats of it along Highway 61 approaching Red Wing.