There are six species of wild rose on the current Garden Census. Details of each are given in comparison chart referenced below.

Carolina Rose Stems: It grows erect, on short stems, not usually branched, from 1/2 to 4-1/2 feet high, that have slim straight prickles near the stem nodes and usually more densely on the lower section of old wood. New growth is greenish and prior year growth reddish before turning brown color on older wood.

Leaves are alternate, pinnate with 5 to 7 oblong leaflets (sometimes 3 and sometimes 9 on vigorous new growth) with sharp teeth. Teeth do not go all the way to the base of the leaf. Each leaflet is without a stalk but the terminal leaflet has a short stalk. The underside of the leaf is a paler color and a few hair on the midrib. The leaf stem has two stipules, each with a pointed serrate flaring tip, at the base where the leaf stalk joins the stem. The stipules look like a wing at the base of the stalk. On the stem node near the stipule are one or a pair of large prickles.

Flowers appear on this years new green growth, which sprouts from prior year stems and are usually solitary but may have a cluster of 2 or 3. Flowering shoots do not have prickles. The hypanthium is globose or ovoid with five green long-pointed sepals. The outside of the sepals and the hypanthium have numerous stalked glands. The flowers are 5-parted with 5 pink petals that are to 1 1-2 to 2-1/3 inches wide when open. The short pedicels (stalks) have a few stalked glands. Veins of darker color radiate outward from the base of the petals. In the center of the 5 petals, which are overlapping and have a small notch at the broad tip, there are numerous stamens with yellow anthers surrounding a short, but wide column of yellow pistils rising from 32 to 46 carpels.

Seed: Flowers mature to a smooth fleshy orange to red globose rose hip, up to 15 mm long, that contains numerous achenes (the true seeds). The flower sepals persist on the apex of the hip. Wild Rose seeds should be sown outside in the Fall. They will germinate in the 2nd year as they need a cold moist period followed by a warm moist period followed by another cold moist period. If seed has been stored for the proper sequence of periods then it should be scarified before planting. Fall planted fresh seeds should not be scarified. While seed is cheap, bare root plants are usually available from native plant nurseries.

Habitat: Pasture Rose grows from a central crown with a tap root and shallow rhizomes that allow the plant to spread vegetatively, and it can do quite well in spreading. While not native to Minnesota, it grows quite well in the central part of the state where I grow it. If you want a wild rose to spread rapidly and fill in an area, this is it. It's underground stolons will expand outward aggressively. The plant prefers full sun, but tolerates some shade, on a wide range of moist to dry soils. It is primarily a plant of the open prairies, upland woods and roadsides.

Names: The genus Rosa is Latin for 'rose'. The species name, carolina, refers to the Carolinas, the location of the type species. There are no other scientific name synonyms for this species, which is a bit unusual. The author name for the plant classification, of 1753, - 'L.' - refers to Carl Linnaeus (1707-1778), Swedish botanist and the developer of the binomial nomenclature of modern taxonomy.

Comparisons: See this comparison chart of the six species of wild rose in the Garden.

Above: Flower are usually solitary and on new green growth from prior year stems, and without prickles.

Below: The flower petals have a slight notch at the tip. Note the fine veining. 2nd photo - The 5 green sepals and the hypanthium of the flower have numerous stalked glands

Below: Leaves usually have 5 to 7 leaflets with sharp teeth. The terminal leaflet has a stalk. The stipules at the base of the leaf each have a pointed tip. 2nd photo - Some leaves on vigorous new growth may have an extra set of leaflets near the base.

Below: 1st photo - The glandular hair on the outside surface of the sepals is visible in the bud stage. 2nd photo - The flower has numerous stamens with yellow anthers surrounding a short, but wide column of yellow pistils. 3rd photo - The leaf stalk has two toothed stipules with flaring tips, where the stalk attaches to the stem.

Below: Flowers mature to a smooth fleshy red rose hip that contains numerous achenes (the true seeds). The flower sepals persist on the apex of the hip.

Below: 1st photo - Wood of the prior year is a reddish brown and has only a few prickles at the nodes. 2nd photo - The base of old stems can have a dense grouping of prickles. 3rd photo - The root system has a crown from which slender rhizomes spread horizontally. 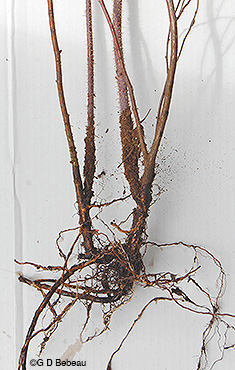 Notes: Smooth Rose is the only rose that Eloise Butler notes as indigenous to the Garden area. Carolina Rose was originally introduced to the Garden by Eloise Butler in 1912 when she brought in plants from Gillett's Nursery of Southwick, MA. On Oct. 9, 1917 she brought in a companion to the first ones, sourced from her landlord's garden (Mr. Babcock). More were added in 1926 and 1930. It was not listed on Martha Crone's 1951 Garden census, and was introduced again at a later date.

Carolina Rose is not considered native to Minnesota as no specimens have ever been collected. Five species of wild rose are recognized as being native to Minnesota, R. acicularlis, R. blanda, R. arkansana, R. woodsii and a cross between R. woodsii and R. blanda known as Rosa ×dulcissima Lunell (pro sp.) [blanda × woodsii]. In North America it is a plant of the eastern half of the continent. Nearby, it is widespread in Wisconsin, but unusual in Iowa. Two subspecies are recognized based on stems erect or spreading and the type of prickles. Consult Ref #W7 for a key.

Edwin Way Teale wrote of this rose: "It is the commonest of all our wild roses. [Note- author is writing in Connecticut.] For me, among all the colors spread across the fields at the end of spring, its clear, unmuddied, modest hue is one of the most appealing. These pink flowers, two or three inches across, decorate bushes that are sometimes no more than a foot of two high. The common names of the pasture rose include the low or dwarf wild rose. Its flowers are frequently few or solitary. But those blooms, with their four [sic.] clear-pink over lapping petals, their delicate perfume, their setting amid dusty fields or rocky slopes, possess an unassuming beauty that produces a lasting impression. Examine one of the petals beneath a magnifying glass and you discover unsuspected beauty, fine lines or veins of darker pink that radiate upward from the base." from A Naturalist Buys an Old Farm, 1974.