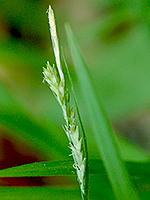 Sedges differ from grasses by having a 3-angled stem and structurally different flowers where the female flowers are enclosed in a sac like structure called the perigynium, which is subtended by a single scale. Hairy Wood Sedge is a smaller perennial loosely tufted sedge of woodlands with fine hair on many parts and hence the alternate common names. The stems (culms) grow 9 to 24 inches high, are acutely 3-angled, dull green with a reddish-brown base, with a rough surface on the angles near the tops and have fine soft hair. Vegetative stems are very leafy and spreading while flowering stems are erect to arched.

The basal leaf sheaths are pale-brown to green but not fibrous. Leaf sheaths have a membranous inner band. The ligules are V shaped, and longer than wide.

The leaf blades are only 4 to 8 mm wide and up to 10 inches long, are medium green in color and also with hairy surfaces. In cross section, the blade is a "M" shape when young with 2 side veins more prominent than the midvein.

The perigynia are 3.5 to 5 mm long by 1.5 to 1.8 mm wide, ascending, with only 2 strong marginal veins, ellipsoid in shape but somewhat 3-sided, hairy. They narrow to a short stalk-like base and form an abrupt beak that is usually bent. (The bladder-like sacs that enclose the female flower and later the fruit are called perigynia, singular - perigynium.) The scales of the pistillate perigynia are greenish, 3-veined, oval to circular, slightly shorter than the perigynia, with pointed tips, hairy on the margins and with short awns. There are 3 stigmas to the flower.

Seed: Mature fruit is an obovate 3-sided achene with flattened sides. These are wind dispersed. Carex achenes usually require 60 days of cold stratification for germination - or sown outside in the Fall.

Habitat: Hairy Wood Sedge grows in woodland areas where there is light shade and only partial sun. It likes mesic to dry conditions and loamy soils. The root systems is short-rhizomatous allowing it to form tufts.

Names: The genus name, Carex, is from the Latin, being the old name for Sedges. The species, hirtifolia, means 'rough leaves' referring the hair on the leaves and stem. The author name for the plant classification, ‘Mack.’ refers to Kenneth Kent Mackenzie (1877-1934) American lawyer and amateur botanist who collected and wrote extensively on the Carex of North America. He is still the recognized author of most of the Carex species classifications. He was on the Board of Managers of the New York Botanical Garden and it received his 43,000 specimen herbarium.

Comparison: The distinctly beaked perigynia with only the two strong marginal veins (or ribs) and with hair on the entire plant are distinguishing characteristics. This species occupies its own section in the Cyperaceae - Hirtifoliae. 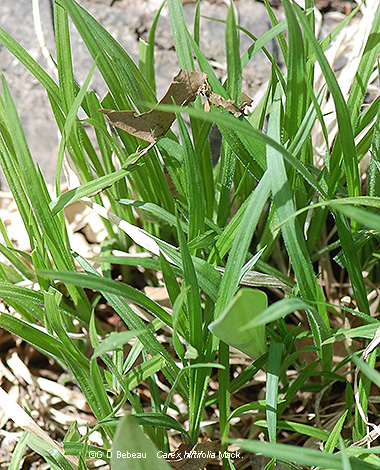 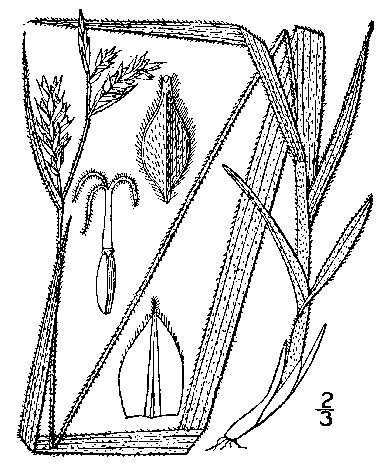 Above: The plant grows up to 24 inches high with all parts hairy. Leaves are shorter - up to 10 inches. Plant Drawing from Britton, N.L., and A. Brown. 1913. An illustrated flora of the northern United States, Canada and the British Possessions. 3 vols. Charles Scribner's Sons, New York.

Below: 1st and 2nd photos - The flowering stem has a single (usually) staminate spike at the top and several pistillate spikes below it. (First photo ©Emmett J. Judziewicz, University of Wisconsin. Third photo stem base area has brown coloration - all parts with hair. 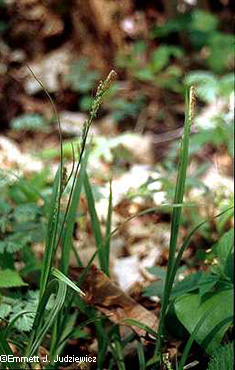 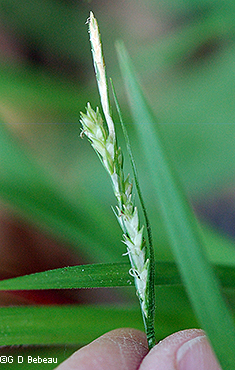 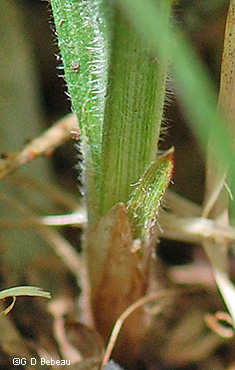 Below: In cross section, the blade is a "M" shape when young with 2 side veins more prominent than the midvein. 2nd photo - lower sheath area. 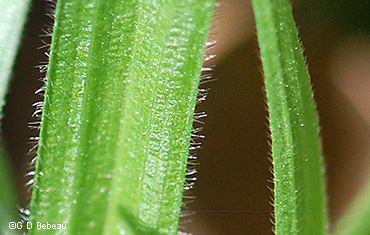 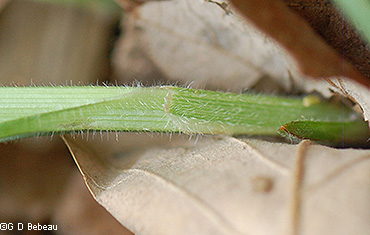 Below: Perigynia are hairy, with two prominent marginal veins and a beak that is usually bent. 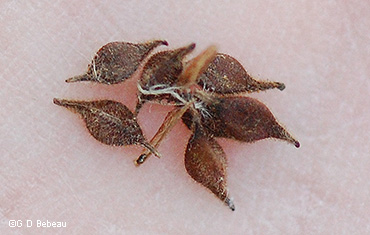 Hairy Wood Sedge, also known as Hairy-leaved Sedge and Pubescent Sedge is one of over 150 sedges native to Minnesota. It is less common with only 34 counties reporting it, most in the SE quadrant of the state up to the south metro area (including Hennepin and Ramsey). In North America it is found from Minnesota to Arkansas in the west, then eastward to the coast, excluding the lower tier of states and the Carolinas in the U.S. and in Canada it is known in Ontario, Quebec, New Brunswick and Nova Scotia. It is a member of the Hirtifoliae sect. of sedges.

Hairy Wood Sedge is extant in the Garden. It has been listed on both the 1986 and 2009 plant census reports.