A web of present and past events

These short articles are written to highlight connections of the plants, history and lore of the Eloise Butler Wildflower Garden with different time frames or outside connections. A web of intersections.

December 15: Our Wild Poinsettia - Not as showy but a native species.

When Joel Roberts Poinsett (1779-1851) American botanist physician and U.S. Minister to Mexico began sending specimens of the Mexican Fireplant back to Charleston greenhouses in the 1820s he would have never visioned the staple of December holiday decoration that the plant now bearing his name would become.

The Christmas Poinsettia, (Euphorbia pulcherimma) has a wild cousin, that we name the Wild Poinsettia (Euphorbia cyathophora), and it was one of the most interesting plants Eloise Butler introduced to the Garden in the Summer of 1913, transplanting it from the Fort Snelling area. Like other Euphorbias, it has the unique flower structure called a cyathium, the detail about which you can read on our plant information sheet, where you can also learn about the toxicity of the genus. It is still listed on the Garden Census in the Upland Garden. They are not as showy as the Christmas poinsettia, plus they are annuals and must be planted where they can self-seed for the next year.

When growing them from seed you must place a small group of them to insure survival of some seeds, but you do not have to control the amount of light and temperature as you do with its more illustrious cousin - nature takes care of that.

For more detail on the species go to our Information Sheet.

Below: Wild Poinsettia in the Garden on September 5, 1952. Photo by Martha Crone.

Hollys have glossy green prickly leaves and hard red berries right? Minnesota’s only native holly, the Winterberry, Ilex verticillata, varies that theme. This one has softer leaves, not glossy, and soft fruit which appeals to the 50 species of bird that eat it. It is a wetland shrub and the large ones in the wetland at Eloise Butler are probably those planted by Gardener Cary George and Joyce Smeby of the Friends in 1987 in honor of retired Gardener Ken Avery, who requested this plant if anything at all were to be done to honor him. There was to be a dedicatory plaque mounted to a rock also, but that seems to have not been done.

Not to matter today as he has his plaque now, mounted on a rock in the Avery Birding Terrace.

Don’t confuse red Winterberry fruit with those of glossy buckthorn - our information sheet can help you with that. And leave the fruit to the birds - in humans it is a great purgative.

More details on Winterberry’s history in the Wildflower Garden, including recent plantings, are on our information sheet.

In our Fall newsletter we reported that Minnesota's climate zones are likely to move northward another 125 to 250 miles in the next 50 years compared to the 70 mile movement of the past 50 years.[note1] We mentioned that this would allow the movement northward from Iowa of the Chinkapin Oak, Quercus muehlenbergii, but this large shift may also allow the introduction of the Scarlet Oak, Quercus coccinea, into at least the southern half of Minnesota. The species has an upright form, the most beautiful Fall color and it already grows here as landscape specimens, nor is it a stranger to the Wildflower Garden as Eloise Butler planted the tree in 1928, as did Cary George in 1994. The habitat of the Garden in Miss Butler's day was not correct for the species and it died out. Scarlet Oak needs a dry, will-drained upland slope with sun. She did not have that in her Garden.

The leaves resemble a cross between Black Oak and Northern Pin Oak. Acorns resemble both, and being a member also of the Red Oak group, the acorns mature on the tree the second year after formation.

For more detail on the species go to our Information Sheet on the tree.

October 17, 2021: Virginia Creeper or Grape Woodbine - Can you tell the difference?:

We tend to notice this vine in the Fall more than any other time of the year when those reddish 5-parted leaves are climbing a tree or a fence. In other seasons the green leaves blend in with so much other green. We all tend to call this plant Virginia Creeper (Parthenocissus quinquefolia), although it is rare in the wild in Minnesota, whereas the look-a-like Grape Woodbine (Parthenocissus vitacea) is found in all but five of our 87 counties.

There are two i.d. keys that separate the two species. The first key is the tendril. Both can climb by twining branching tendrils but Virginia Creeper's tendrils form at the tip a knob which flattens and becomes a mucilaginous disk that adheres to the surface it touches. Woodbine does not have the disks. The other key is in the flower panicle - the inflorescence. Creeper has a divergently branched cluster, usually longer than wide, that has a distinct central axis. This means it can continue to extend as much as the vigor of the plant allows. Woodbine has what is called a dichotomous cluster, that is, branched into two somewhat equal forks, sometimes 3, without a distinct central axis and usually wider than long, and the two or three branches are as far as it can grow. Otherwise the flowers themselves are quite similar as are the fruits, although Woodbine's flowers and fruits are somewhat larger. More details about both species are found on our information page.

Many are the seeds that get transported near and far by humans and animals. The common method is to simply “attach,” and not fall all, hence the common name of “stick tights.” Here are five examples that represent a fair example of the how they do it.

Thoreau explained it this way:
“There is a Patent Office at the seat of government of the universe, whose managers are as much interested in the dispersion of seeds as any body at Washington can be, and their operations are infinitely more extensive and regular."
And about the beggar ticks: “If in October you have occasion to pass through or along some half-dried pool, these seeds will often adhere to your clothes in surprising numbers. It is as if you had unconsciously made your way through the ranks of some countless but invisible lilliputian army, which in their anger had discharged all their arrows and darts at you, though none of them reached higher than your legs.” 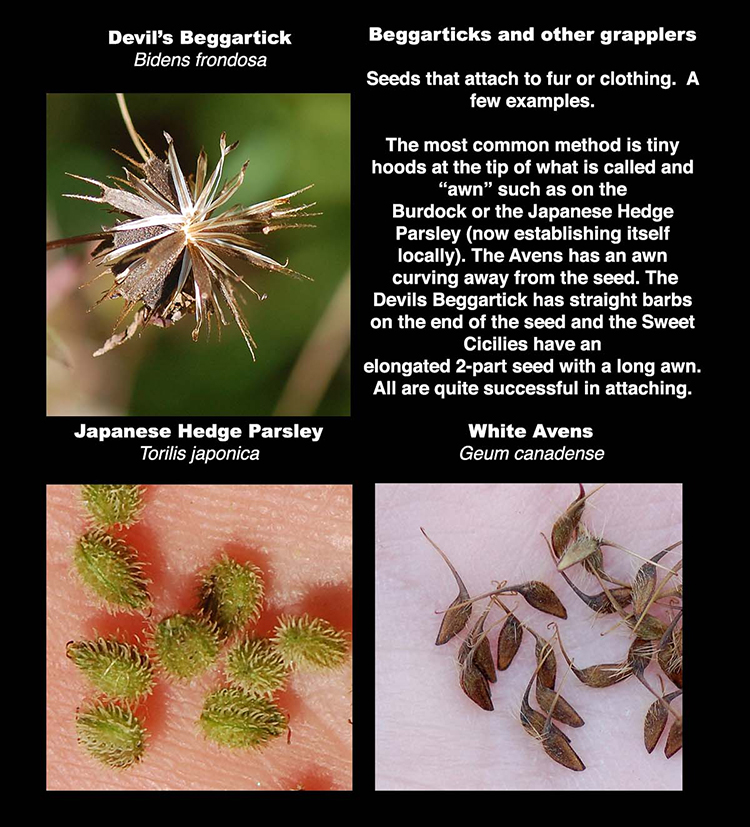 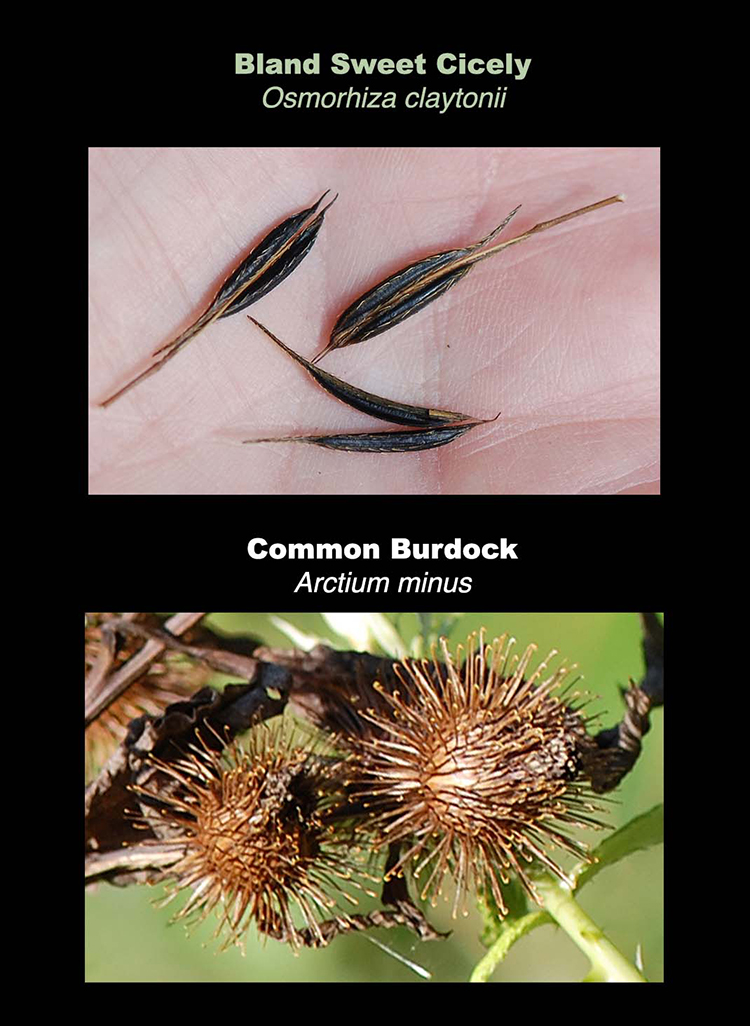 The dry summer was a good test of the survivability of plants that do not receive supplemental watering. One of the ground covers that has done well in my area and garden is Pennsylvania Sedge (Carex pennsylvanica). It has remained green throughout the summer. This is a sedge that prefers well-drained upland sites with full to partial sun, particularly in the open forest understory and especially near oaks - hence one of the alternate common names - Common Oak Sedge. It tolerates full shade.

A ground cover’s duty is to cover the ground and this sedge does it by its spreading underground stolons; reseeding is uncommon. White tail deer and rabbits do not much browse it so it grows unburdened by natural lawn mowers. It is one of the first sedges to flower in the spring, before the leaves are unfurling on the oaks. It forms clumps with cascading leaves, the clump usually not over eight inches high.

It transplants readily and will fill in an area within a year or two; therefore beware! It spreads so you may need to control it. The Forest Service considers it a potential invasive in the northern Minnesota forests as climate change raises temperatures and moves more of our deciduous trees into what is now a mostly conifer zone. 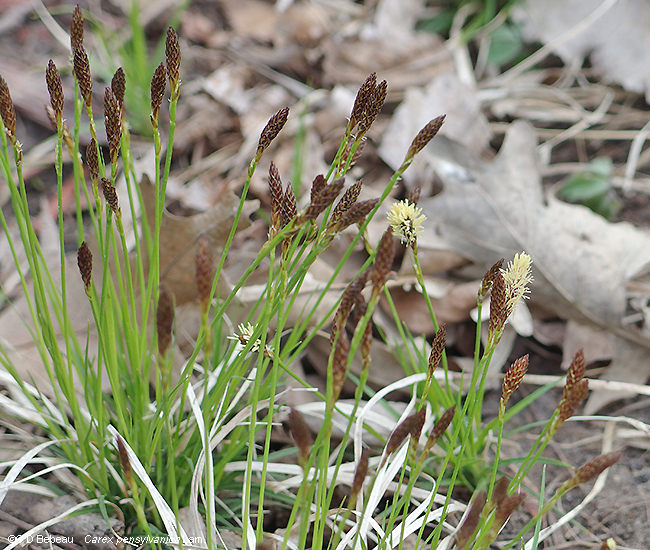 Selections published in 2021 July to September

Selections published in 2021 January to June