Zigzag Goldenrod is a native erect perennial forb, growing on leafy stems from 8 inches to 4 feet high that are sometimes branched within the floral array. It is hairy in the floral array and mostly smooth below. The common name refers to the zigzags of the upper stem.

Leaves: Lower basal leaves are oval to egg shaped with sharp teeth, narrowed at the base to a short winged stalk and with a pointed tip. Upper leaves within the floral array are more linear with less pronounced teeth. The underside of the lower leaves have dense short hair and longer hair on the veins. The basal rosette will be present at flowering time.

The floral array is a a raceme of stalked flowers atop the stem and additional flower racemes rising from the upper leaf axils. The raceme is decidedly angled just like the lower stem. Arrays can have 25 to 250 heads.

Flowers: Each composite flower head has 1 to 5 yellow outer ray florets which are pistillate only and fertile. These surround 4 to 8 disc florets that are bisexual and fertile; these have yellow corolla tubes with 5 lobes, the apex of the lobes folded outwards and downwards. The five stamens and single style are exserted form the corolla tube. The long style has appendages somewhat triangular in shape. The phyllaries around the outside of the flower head are in three series. They are green and narrow with the inner much longer than the outer. A single leafy bract subtends each flower head. The head has a very short hairy stalk.

Seed: Seeds are a short, narrowly cone-shaped cypsela, 1 to 2 mm long, and hairy with a white fluffy pappus for wind distribution. Seeds of Solidago usually require 60 days of cold stratification and light for germination.

Habitat: Zigzag Goldenrod likes a shady to partially sunny area, thus most will be found along path edges and in dry to moist woodland openings. The root system has many short rhizomes and a woody caudex.

Names: The species name, flexicaulis, means "flexible" and refers to the stem's angles. The genus name is from the Latin solidare, as the plants of this genus were known to "make whole". (see bottom of page for medicinal lore). The author name for the plant classification from 1753, 'L.' is for Carl Linnaeus (1707-1778), Swedish botanist and the developer of the binomial nomenclature of modern taxonomy. In earlier times many no longer accepted names had been applied to this species - two such names were S. latifolia and S. scrophulariifolia.

Comparisons: This woodland goldenrod with the zigzag stem and the broad, egg shaped toothed leaves should not be confusing with any other, although a cursory glance may confuse the flower raceme with Agrimony. 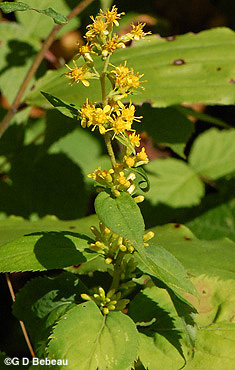 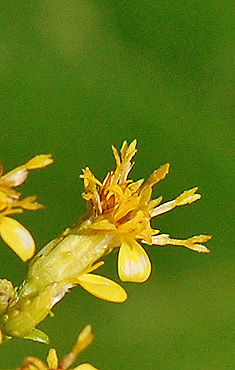 Above:: 1st & 2nd photos - The floral array with its smaller leaves. Larger egg shaped stem leaves below. 3rd photo - Rays are 1 to 5, with the center disc floret having 5 outward turned lobes of the corolla tube and protruding stamens and style.

Below: A comparison of the large lower stem leaf with an upper stem leaf.

Below: 1st photo -The green phyllaries are in 3 rows, the inner longer than the outer. Note the leafy bract subtended from each head. Note the triangular appendages on the long styles and the hairy stems within the array. 2nd photo - The underside of the leaf is covered with dense short hair giving it a whitish appearance, longer hair on the midrib. 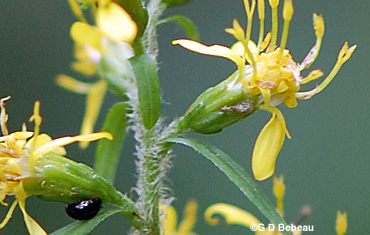 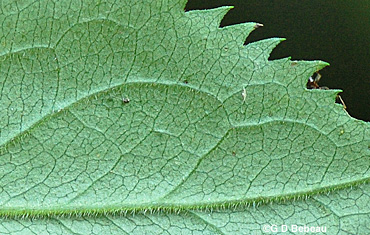 Below: 1st photo - Buds of a new flower cluster in the leaf axil. 2nd photo - The large egg shaped lower leaf with winged stalk, sharp teeth and pointed tip. 3rd photo - The stem below the array is without hair or only sparsely hairy. 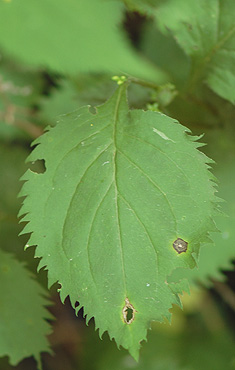 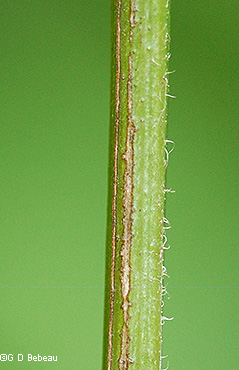 Below: 1st and 2nd photos - The dry seeds have a white fluffy pappus for wind distribution. 3rd photo - Individual seeds are a narrow cone shape with hair. 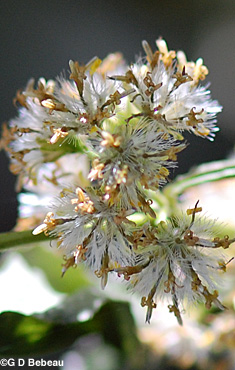 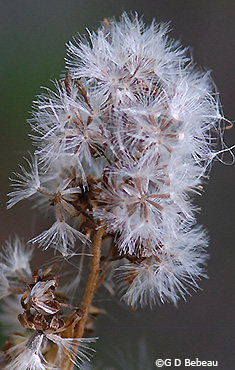 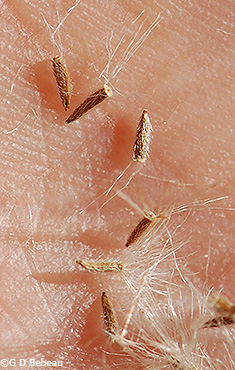 Below: The root system has many short rhizomes and a woody caudex.

Notes: Zigzag Gldenrod is indigenous to the Garden area. Eloise Butler catalogued it on Sept. 6, 1907 using an old botanical name S. latifolia. She added more plants in 1921, sourced from Eau Claire, WI, and more in 1932. It was listed on Martha Crone's 1951 inventory of plants in the Garden at that time. Susan Wilkins added plants in 2009, '11, '12 and '13. The plant is native to Minnesota in many counties except those of the SW, the far north and Cook. In North America its range in the U.S. is from the central plains eastward excepting MI and FL. In Canada it is known from Ontario, Quebec, Nova Scotia, New Brunswick and Prince Edward. There are 18 species of Solidago known in the wild in Minnesota.

Medicinal Lore: The genus Solidago has several species, including flexicaulis, whose leaves and tops and roots were used by natives for various disorders. Here in Minnesota, Frances Densmore (Ref. #5) reported that the Chippewa used various species of Goldenrod for treating fevers, colds, ulcers and boils. Specifically in regards S. flexicaulis, the root was chewed for toothache. Mrs. Grieve (Ref. #7) reports on European use of various Goldenrod species. Principal constituents of the plants are tannin and bitter and astringent principles which were used in infusions for various ills.