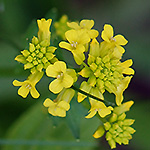 Yellow Rocket is an erect introduced and naturalized invasive biennial forb that grows from 8 to 30 inches high on dark green stems that branch near the top. Stems develop the second year from the first year's basal rosette of leaves. Stems are angular, smooth and green with some reddish hints.

The leaves are both basal and stem. Basal leaves are long, lyrate-pinnatifid, with 1 to 4 pair of lateral lobes and a larger rounded terminal lobe. The lobes may have wavy margins or be with coarse dentations. Stem leaves, while similar in appearance to the basal leaves, have fewer lobes and become shorter toward the top of the stem. These are alternate and stalkless or they clasp the stem with a pair of auricles that have pointed tips and rounded ears.

The inflorescence is an erect dense raceme of stalked flowers which elongates as the flowers open and seed pods form beneath - typical of many plants of the Mustard family.

The flowers have a green calyx of (usually) 4 greenish-yellow sepals with linear lobes, a corolla with 4 yellow petals forming a short tube with the rounded lips spreading outward. There are six stamens, 2 shorter and 4 longer, with yellow anthers and a single style with a blunt tip. Flowers open from around the outside of the raceme first.

Habitat: Yellow Rocket is found in waste places, ditches, roadsides, fields and gardens. It grows in average to rich soils, moist to mesic conditions and full to partial sun. It grows from a taproot and principally spreads by re-seeding. Eradication is best by simply pulling the root before seed is set.

Names: The genus Barbarea was applied to a plant of this genus once known as the herb of St. Barbara, Herba sanctae Barbarae. The species vulgaris is from the Latin meaning 'common'. The author name ‘R.Br.’ is for Robert Brown (1773-1858), Scottish botanist for whom ‘Brownian motion’ is named. He provided names and descriptions of various plant families and was the first keeper of the Botanical Dept. of the British Museum.

Comparisons: The other cress that may be found in Minnesota, but only in the far north is Northern Winter Cress, Barbarea orthoceras. There the flower stem is not a rounded raceme but much more elongated, resembling a ball bat. There is another plant, similar to B. vulgaris, known as Barbarea stricta (Small-flowered Wintercress). It has much more limited distribution in North America. The key differences are B. stricta has shorter styles, seed pods very erect to actually appressed the the stem, and leaves that usually have fine hair. Many references now consider it as a synonym for B. vulgaris, but Flora of North America distinguishes it as a separate species. Another yellow flowered Mustard Family plant found in Minnesota is the native Western Wallflower, Erysimum asperum. 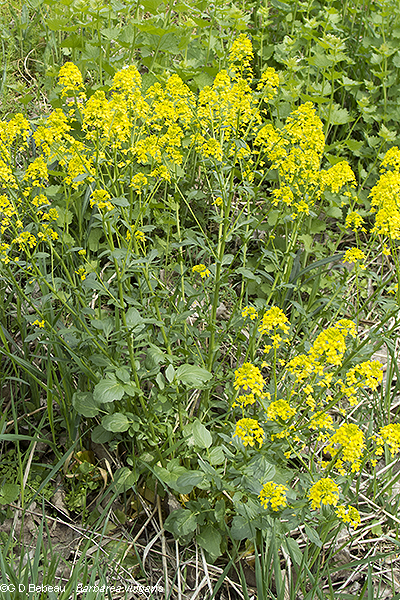 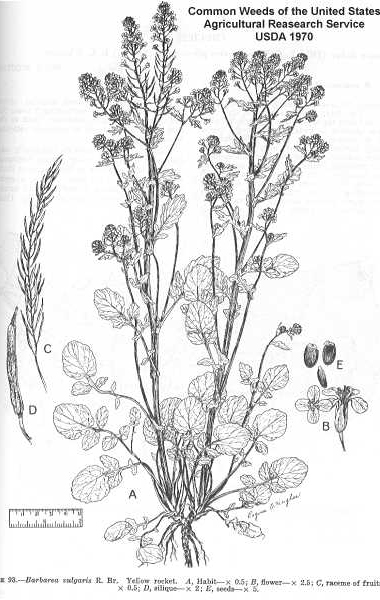 Below: A large plant branches at the top into a number of flower clusters. The corolla petals form a tube with the lips of the 4 petals spreading outward reveling the 6 stamens and the blunt tipped style. 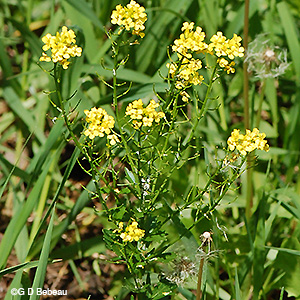 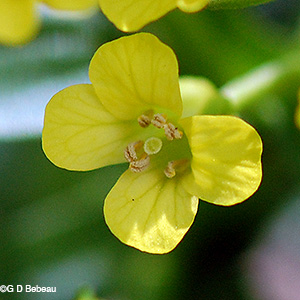 Below: Each cluster contains numerous flowers that open first from the outside of the cluster. The cluster then elongates leaving the spent flowers to form seed pods. The calyx has 4 yellowish-green lobes 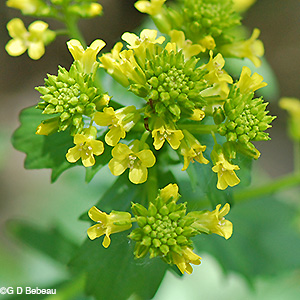 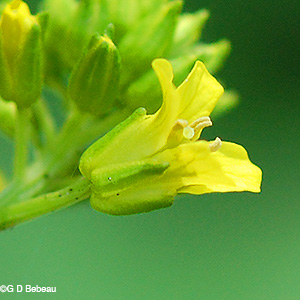 Below : Upper leaves are very short, usually not divided and all the stem leaves have an eared auricle that clasps the stem. 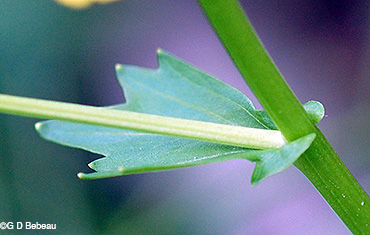 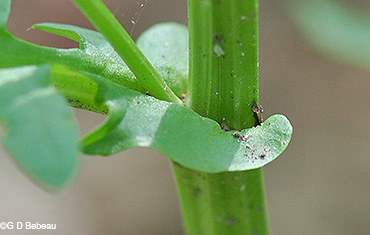 Below: As the flowers of the raceme open, it elongates and the flowers that first opened have formed the thin seed pods. 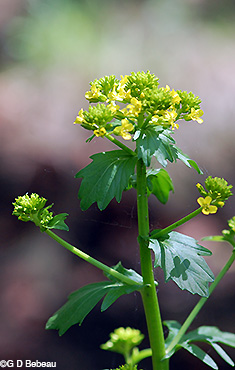 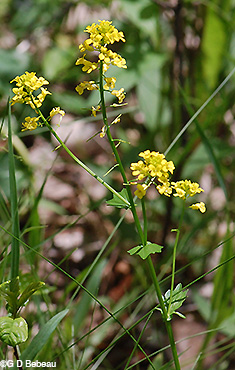 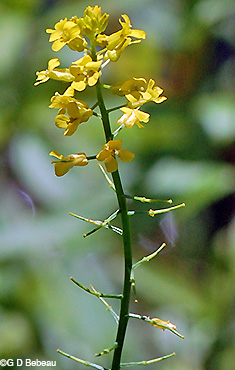 Below: The stem is ridged. 2nd photo - A lower stem leaf showing the division into lobes with the terminal lobe the largest. 3rd photo - The paler underside. 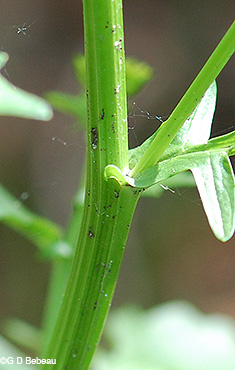 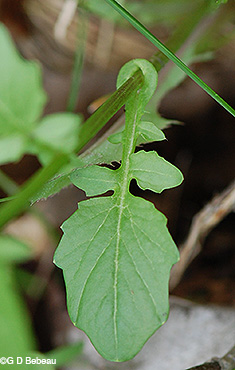 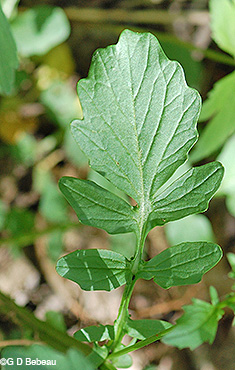 Below: Seeds are in a thin angled silique, arranged in separate partitions in a single row. The silique splits open when mature to dispense the seed.

Notes: Yellow Rocket was originally introduced to the Garden on April 12, 1915 when Eloise Butler brought in 3 plants from the area of Minnehaha Falls (Minneapolis). She noted Yellow Rocket in bloom in June 1919. She used the name Barbarea stricta which is sometimes considered a synonym for B. vulgaris (see discussion at top of page) but B. stricta has never been collected in Minnesota so what Eloise brought in from Minnehaha had to be our current B. vulgaris. Martha Crone planted seeds of it in 1947; it was included on her 1951 census with the name B. vulgaris and was still in the Garden for the 1986 census but is no longer extant. Yellow Rocket is found throughout North America except in the far north and several states of the far south. It is an import from Eurasia. In Minnesota it is known in about half the counties of the state, principally on east side of the state, north to south.

Invasive: Yellow Rocket is a common plant in Hennepin County and becoming very invasive, particularly in the West Metro. It is really a double threat as it prefers sun whereas our other mustard family threat - Garlic Mustard - prefers shady areas.