Yellow Foxtail is an annual warm season non-native grass with erect or low-lying stems, growing from 1/2 to 4 feet high; with stems branching from the base. Stem nodes are swollen and usually reddish-purple at maturity.

Leaf blades are up to 3/8 inch wide (10 mm) and up to 10 inches (25 cm) long. Blades can be flat or V-shaped, twisted, drooping, distinctly veined, slightly rough to smooth on upper and lower surfaces. Blades of ssp. pumila are yellowish-green. Ligules are 1 mm long with a fringe of fine hairs fused at the base. The blade sheath is split, sharply keeled and distinctly veined and with long twisted hairs near the base of the upper surface.

Inflorescence: An erect panicle with the spikelets in a tightly packed cylindrical shape 2 to 4+ inches long, densely bristly.

Subspecies: The other major subspecies, ssp. pallidefusca, has reddish bristles and the spikelets are 2 to 2.5 mm long, but that subspecies is known in only two states and not found in this area although one population was once reported in Anoka County.

Habitat: Yellow Foxtail grows from fibrous roots in open places and in cultivated areas. It thus does well in sunny area with mesic to dry mesic moisture conditions. It is generally considered weedy and unwanted and can be an impurity in commercial clover and grain seeds.

Names: Yellow Foxtail was formerly classified as Setaria glauca. The genus Setaria is derived from the Latin seta, meaning a 'bristle', and aria, meaning 'possessing', referring to the bristly inflorescence. The species name, pumila, means 'dwarf', referring the size of the plant compared to others in the genus. The author names for the plant classification are complex. The first author, ‘Poir.’ refers to Jean Louis Marie Poiret (1755-1834) French clergyman, botanist and explorer and Professor of Natural History at the Ecoles Centrale of Aisne. His work was updated by two others: ‘Roem.’ is for Johann Jacob Roemer (1763-1819) Swiss botanist who with Schult. published the 16th edition of Linnaeus’ Systema Vegetabilum. ‘Schult.’ is Roemer's co-author Josef August Schultes (1773-1831), Austrian Botanist. 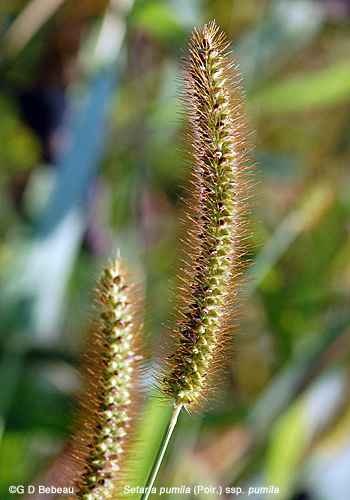 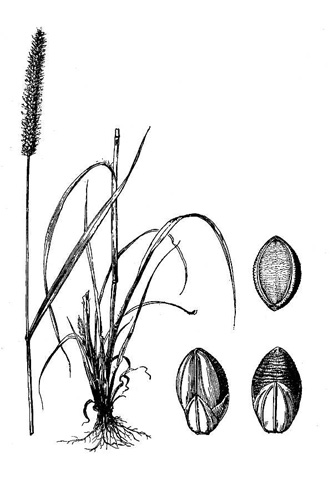 Above : Maturing seed heads of Yellow Foxtail. Drawing of Yellow Foxtail from Hitchcock, A.S. (rev. A. Chase). 1950. Manual of the grasses of the United States. Courtesy of USDA-NRCS PLANTS Database.

Below: The upper section of the plant - heads are frequently arching, the upper leaf blade is about as long as the inflorescence. 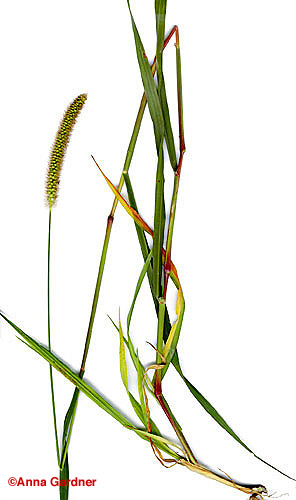 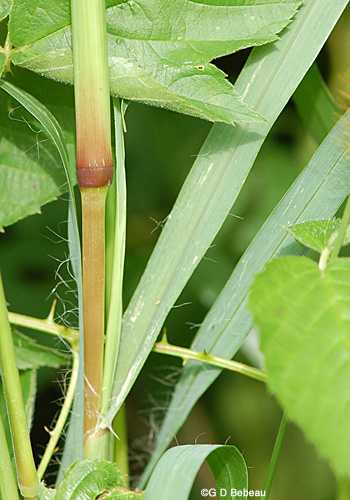 Below: Detail of the seed panicle in August (1st photo) and September (2nd photo). 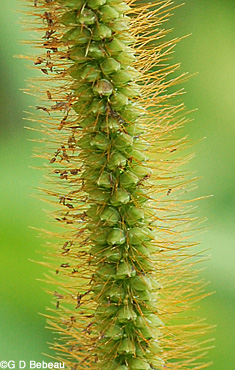 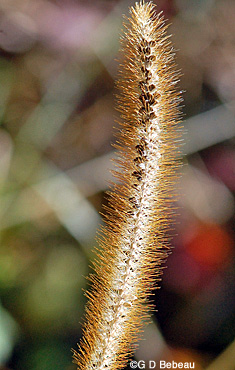 Below: 1st photo - detail of spikelets showing the bristles and veins of the glumes and lemmas. 2nd photo - root system. 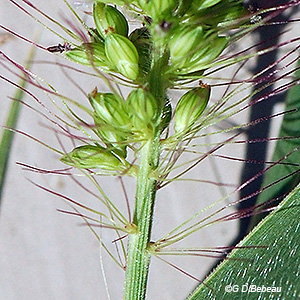 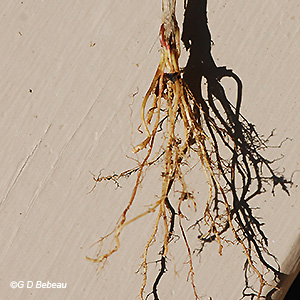 Below: 1st photo - the upper leaf surface of this example is flat. 2nd photo - the underside of the leaf can have a distinct center rib. 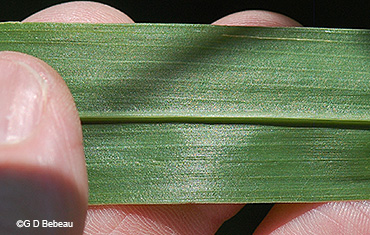 Below: - Blade and sheath detail. Not the long twisted hair - bottom of the blade. 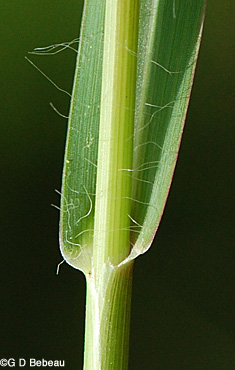 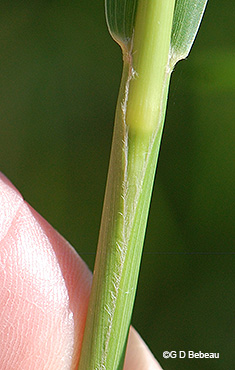 Above: Maturing panicle. Below: Mature panicle in September.

Below: Detail of the spikelet showing the sterile and fertile lemma - note the transverse ridges on the fertile lemma. Photo ©Anna Gardner, Iowa State University. 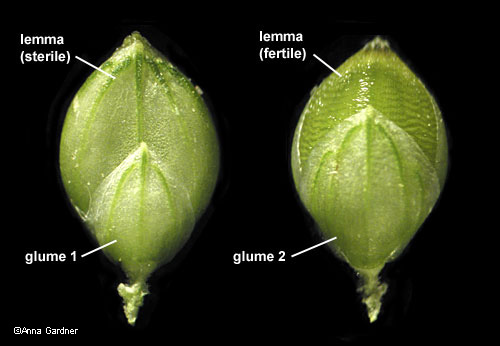 Below: Seeds are about 3 mm long, dark yellowish-brown, with the palea and wrinkled lemma usually adherent. 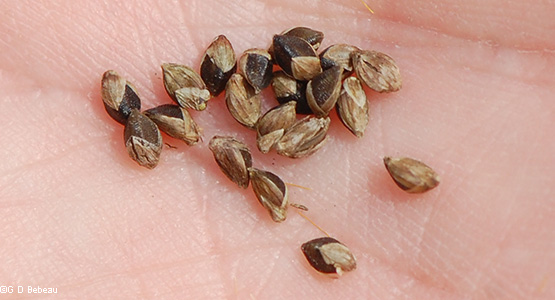 Notes: Yellow Foxtail has probably been in the Garden for some time. Eloise Butler catalogued 'foxtail grass' in her early Garden records, without specifying the species.

Yellow Foxtail is a non-native Eurasian and North African grass that is spread throughout the United States and the lower Canadian Provinces. It is widespread in Minnesota with only a handful of scattered counties not reporting it. Setaria is a large genus with many species in North America. All the foxtail grasses found in Minnesota are non-native species. In addition to S. pumila, the following are found in the state: S. faberi, Giant Foxtail; S. italica, Foxtail Millet; S. verticillata, Bristly Foxtail; S. viridis (in 2 varieties), Green Foxtail.