Yellow Flag Is a non-native plant of marshes and wet meadows, it is similar to the Blue Flag Iris; the plant grows 1 to 3 feet high with solid stems. The plant is considered invasive - see notes at bottom of page.

Leaves are sword shaped, 20 to 40 inches long, dark green, with a raised (thickened) mid-rid, and not prominently veined. Basal leaves rise from the root in a fan shape, erect, and then later drooping. The flower stem may also have leaves and these usually rise equal to or higher than the flower stalk.

The inflorescence consists of 2 to 12 flowers (but usually only 2 to 3), that are similar to many beardless iris, at the top of a solid stem that rises from the root. Stems may branch once and may have some stem leaves. The upper section of the stem under each flower forms a spathe covering the ovary of the flower. Blooms are usually in early to late June, depending on the early or late onset of Spring.

Flowers are about 4 inches wide; the entire perianth being yellow. The 3 outward spreading drooping sepals (called 'falls' in the Iris genus), which surround the true flower, can vary slightly in yellow shades, pale yellow being most common; they have short claws and are usually brown veined, as the photos show, and in the base area there is a deeper color patch known as a 'signal'. The petals (called 'standards' in the Iris genus) are smaller than the sepals and curve upward. They are the same color with smooth margins. The fruiting parts are in the center of the flower. The style forms flat petal like branches with spreading crests, that reflex outward atop the base of the sepals and cover the anthers and sigma, providing rain cover for the pollen. The nectar of the plant is in glands at the base of the petals.

Fruit: Seed capsules are slightly 3-angled outlining the three inner chambers of the ovary, each with two rows of seeds, which turn dark brown at maturity. The seeds are flat, D shaped and corky and distributed by wind when the capsule opens and also by water transportation. Most iris seeds need at least 120 days of cold stratification for germination. After germination the young plant quickly develops 3 leaves and many roots to quickly anckor it in position.

Habitat: The plant spreads via stout branching rhizomes which have fleshy roots; it forms clumps as the rhizomes separate. The rhizome branches are the same size and texture as the main rhizome (said to be 'homogeneous'). It can grow in a variety of soils with pH ranging from 3.6 to 7.7 and tolerates low oxygen, but it must have full to partial sun and moist conditions.

Names: The genus name, Iris, is after the Greek goddess of the rainbow. The species pseudacorus is derived from two Greek words, pseudo, meaning 'false' and Acorus, the Sweet Flag plant; all this meaning that this is a 'false Sweet Flag'. This is due to the rhizomes (and also the leaves after flowering) resembling those of Sweet Flag - another plant of marshes. The author name for the plant classification - 'L.' is for Carl Linnaeus (1707-1778), Swedish botanist and the developer of the binomial nomenclature of modern taxonomy.

Comparison: The other iris in the Garden marsh is Blue Flag, Iris versicolor L. which is a our native marsh iris that is indigenous to the Garden.

Above and below: Iris flower parts are 3 sepals (spreading) called 'falls' and 3 smaller petals between them (upright) called 'standards'. Lying on top of the sepals are the styles with an upturned tip (the style crest) (top view below 1st photo). Under the style crest is the stamen (below 2nd photo) and the lip of the stigma. The bulge in the stem just below the sepals (above) is the ovary, covered by a green spathe. 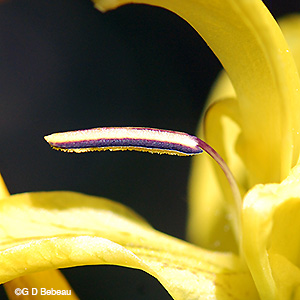 Below: 1st photo - The seed pod is three angled, with 3 chambers. 2nd photo - Each seed is dark brown at maturity, flat, D shaped and corky. 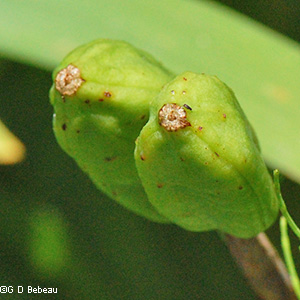 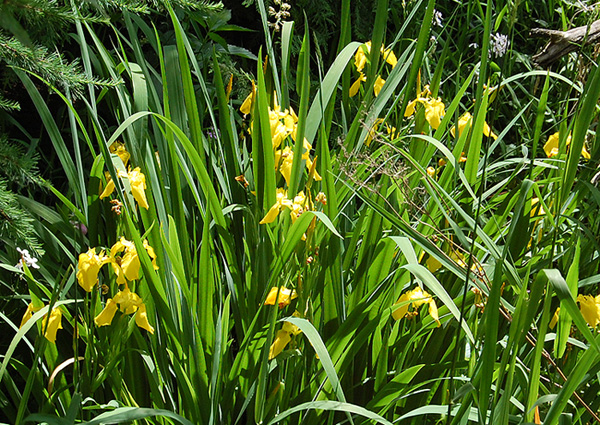 Notes: Yellow Flag is not native (it's native to Eurasia) and is an escapee from cultivation. It is on the MN DNR List of invasive non-native terrestrial plants and is being considered for regulation as an exotic species. The plant forms clusters with strongly attached roots in wet areas - such that it is good for erosion control but bad in that it crowds out the native species, reducing species diversity which in turn affects life in the animal and insect kingdoms. It has been collected in 10 counties in the state (2019), a number of metro area counties included. In North America it has been naturalized in all the lower states and Canadian Provinces with exceptions mainly in the Great Plains. Control of the plant is via digging out all the rhizomes or an application of glyphosate.

Martha Crone 1st planted it in April 1948, and more in 1949 and 1951. She listed it on her 1951 Garden Census and it has been in the Garden ever since and while invasive, has been allowed to remain under control.

There are three species of wild Iris found in Minnesota. The introduced I. pseudacorus, Yellow Flag and two native species - I. versicolor, Blue Flag (or Northern Blue Flag), and I. virginica, Southern Blue Flag, which is found only in the SE quadrant of the state.

Uses and Lore: Yellow Flag can absorb metals and lives in areas of high levels of soluble organics. USDA reports that the plant may be able to remove heavy metals efficiently and economically from wastewater. It is unpalatable to livestock due to levels of glycoside in the leaves. French chemists in the 19th century discovered that the ripe seeds, when roasted, make a good coffee substitute. (Refs W2, 7 and 31). From a medicinal standpoint, there is literature going back as far a Pliny. Gerard, Culpepper and Parkinson all discuss it.

Fleur de Lys: Iris pseudacorus grows extensively in Europe and Eurasia. There are several legends as to how this plant became the heraldic emblem of the Kings of France. The oldest legend goes back to King Clovis in the 6th century who after praying to his wife's Christian god for victory in battle, became a Christian after winning the battle. He then replaced the toads on his banner with three Irises, the Iris being the Virgin’s flower. Louis VII made it the official emblem 600 years later and it then became known as the Fleur de Louis, corrupted to Fleur de Luce [Flowerdeluce in English] and then to Fleur-de-lis. Mrs. Grieve (Ref. #7) has several other theories but common among all of them is that Yellow Flag is considered to be the original model for the fleur-de-lis of French heraldry.

A few quotes from John Parkinson [ref. #34-d] will give an example of the many old herbal uses that he outlines. I have left the old English as he wrote it except to subsitute the modern "s" for the old "f" and "ff":
The juice or the decoction of the greene rootes of the Flag Flowerdeluce, with a little honey & Spiknard, the same being drunk, doth ease the pains and torments, or wringing of the belly & sides, the shakings of agues, the diseases of the liver and spleen, the wormes of the belly, the stone in the raines, convulsions or crampes that come of cold humors, by warming them and comforting the parts.
The dryed rotes being beaten either alone of themselves into powder, or with other sweete things, are used to be layd in presses, chests and wardrops, to sweeten and perfume garments of linen, and silke especially, and all things that you will put it to.