The leaves are basal with long-stalks, divided into 3 to 5 palmately divided lobes, which may be referred to as leaflets as Flora of North America does, although some references refer only to 'lobes'. Lobes or leaflets, they are unevenly toothed with deep clefts and often reddish-bronze color when young, turning green with age, and have fine hair on the upper surface and sometimes on the lower surface. The clefts of the lobes occur only on the upper 1/3 to 1/2 of the lobe and in this variety the lateral lobes also have these clefts. The terminal lobe may have a short stalk. Plants with aerial stems (scapes) do not have true leaves on the stem, but instead they have leafy structures called bracts. Just below the flower head is a whorl of these smaller stalked bracts, all 3 on the same plane. They resemble the leaflets in all other respects.

The inflorescence is a single flower, about 1 inch wide, on a long stalk rising directly from the root and appearing above a whorl of 3 leaf-like bracts.

Flowers: Blooms can begin in mid-April if the season is early and can last into June during a late spring season. The flower may have a pinkish tinge when it opens, but turns white as it matures. The color is in the sepals, there are no petals. Sepals normally number 5 but there can be up to 25. The multitude of additional sepals can give the appearance of a doubled flower. Stamens number 30 to 60 have white filaments and creamy-white anthers. The stamens surround a greenish set of pistils, each with a style - one ovule per pistil.

Seed: Mature flowers produce a dry ellipsoid to ovoid shaped achene that is up to 1/5 inch long (4.5 mm)

Habitat: Wood Anemone grows from a slender, horizontal root stalk (rhizome). It can be grown in a variety of soils and conditions from wet meadows to thickets, clearings and open woods. The rhizomes will form clumps of plants forming a colony.

Names: The genus Anemone, is obscure but is generally applied to what are called windflowers, and is thought by some to be from the Greek anemos, meaning 'wind'. But the studied opinion (see Stern, Ref.#37a, and Ref.#W7) is that consideration must also given to the god Adonis, who in the Greek myth was killed while hunting a boar and from his blood came a red windflower [Anemone coronaria] and the name is a corruption of an old Semitic word for Adonis. The species quinquefolia is from the Latin quinatus, meaning 'fives' and referring to 'five-leaved' which is the number of lobes, or leaflets, the basal leaves can have. The author name for the plant classification - 'L.' refers to Carl Linnaeus (1707-1778), Swedish botanist and the developer of the binomial nomenclature of modern taxonomy.

Comparisons: The two most common plants in our area that have similarities are the Rue Anemone, Thalictrum thalictroides, and the Canada Anemone, Anemone canadensis. In both species the bracts of the aerial stem are different in appearance. 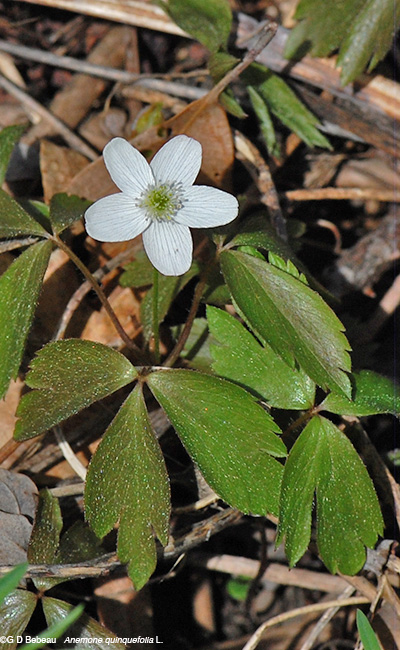 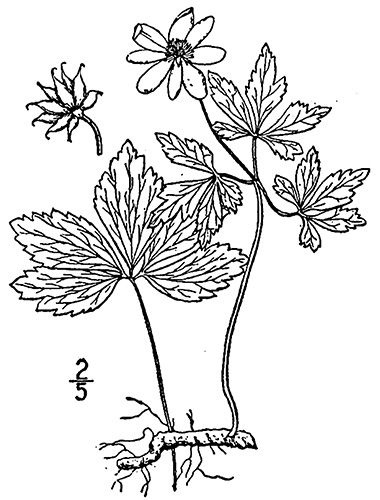 Above: The leaves are all basal, have fine hair on the upper surface, are reddish-bronze when young turing to green later. The leaf lobes are toothed or deeply cleft. Drawing from Britton, N.L., and A. Brown. 1913. An illustrated flora of the northern United States, Canada and the British Possessions. 3 vols. Charles Scribner's Sons, New York.

Below: 1st photo - Flowers usually have 5 colored sepals (no petals) but can have many more. 2nd photo - Under the flower is a whorl of 3 bracts on the aerial stem, which resemble the leaves but are not. 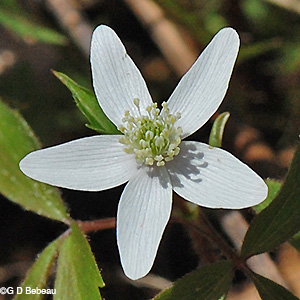 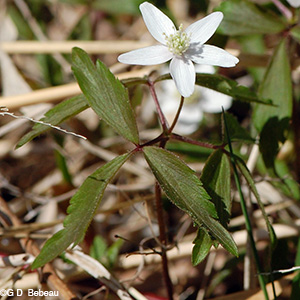 Below: A flowering aerial stem. Three bracts from a whorl at the top of the stem, from which rises the stalk of the solitary flower. The bracts have three lobes (just like the leaves have 3 leaflets).

Below: 1st photo - There are numerous stamens with creamy-white anthers. 2nd photo - The underside of the flower. The stalk has fine hair. 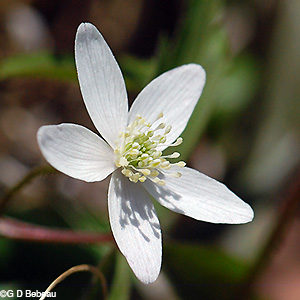 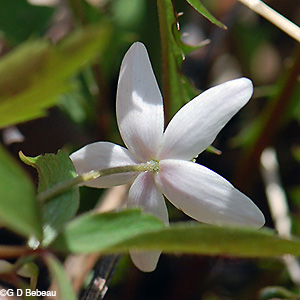 Below: 1st photo - A section of an upper bract. Note the fine hair on the margin and on the surface. 2nd photo - the underside of this leaf is more smooth.

Notes: Wood Anemone is not indigenous to the Garden. Eloise Butler planted the first ones when she brought in 7 plants on April 28, 1916 that she sourced "in the vicinity of Fridley" (MN). In May 1917 she brought in plants found in Glenwood Park. Eloise sometimes referred to it as the 'Grove Anemone'. It was listed on Martha Crone's 1951 inventory of plants in the Garden at that time. She specifically noted it in bloom in 1939. The plant is native to Minnesota in most counties except the SW Quadrant and a few counties in the NW. In the U. S. it is found from Minnesota eastward with the exception of Louisiana and Florida, but in Canada it is found in the all the lower provinces except British Columbia.