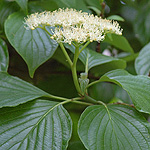 Pagoda Dogwood is a native deciduous shrub with alternate leaves that are however, mostly clustered at the ends of branches. It usually can be formed into a small tree and can reach up to 30 feet in height, with the smooth greenish color branches growing almost horizontal, which gives it the common name of Pagoda Dogwood as these horizontal branches are tiered into decreasing widths near the top resembling a pagoda. It is the only native dogwood that will form a tree shape.

Twigs are reddish in color, branching singly, with terminal buds not much wider than the twig. Buds are reddish also with 2 to 3 bud scales visible. The flower buds break from the terminal bud at the same time as the leaves as shown below. Lenticels are easily visible on young twigs.

Leaves are broadly oval, appear entire (toothless) but some plants may have very minute teeth (not universal), have a rounded base with a tapering tip, glossy green on top, up to 4 inches long. Very fine hair on the leaf petiole and the underside. Leaf veins are prominent giving the leaf surface a 'quilt-like' look, and the 5 to 6 lateral veins curve up toward the leaf tip (are said to be 'arcuate'). Fall color is yellowish to reddish.

The inflorescence is a flat-topped branched cluster (a cyme) rising from the terminal bud of last years twigs; each cluster from 2 to 4 inches wide containing 50 to hundreds of flowers - the most of any of the 4 dogwoods listed below.

The flowers are perfect, white, 4 part, small, 1/4 inch wide, with a short 4-toothed calyx, 4 spreading lance-shaped white petals, 4 stamens that arise alternate with the petals on long white exerted filaments with yellow anthers and a single yellow-green pistil with a single style that has a knob-like tip.

The fruit is an globular drupe, about 1/4 inch diameter, containing an ovoid shape stone, 5 to 6 mm in diameter and slightly flattened. Fruit turns dark blue in late summer attached to a stalk that turns reddish. Seed germination requires at least 60 days of cold stratification.

Habitat: Pagoda Dogwood is usually found growing as an understory tree or shrub in partial to full shade. Soils should be of good quality with wet to mesic moisture conditions. For full flowering and large size, the species should be grown in partial sun to full sun, and if full sun, with moist conditions.

Names: The genus, Cornus, is from the Latin cormu which refers to a 'horn'. Most references believe that name was applied as a reference to the density of the wood of this genus, which also includes the boxwoods. As to the common name, Dogwood is very dense and was once used for loom shuttles and spindles and in old English "Dagwood" referring to woods used in making daggers, skewers, and arrows. The Spindle Tree (Euonymus atropurpureus) is another such species which was referred to by some as “dogwood”. (Ref. #7).

Cornus is also the old Latin name for the cornelian cherry, Cornus mas. The species name, alternifolia, refers to the alternate leaves. The author name for the plant classification - ‘L.f.’ refers to Carl Linnaeus the Younger (1741-1783), Swedish naturalist, son of Carl Linnaeus, who did some follow-on work from his father’s, published Supplementum Plantarum systematis vegetabilium in 1781 and died, childless, of jaundice.

Comparisons: There are four Dogwoods in the Garden. All have similar looking flowers. An identification key is presented below the photos. 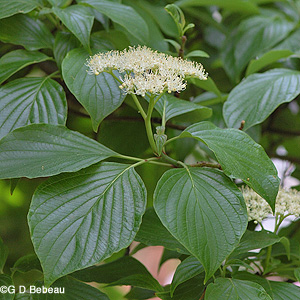 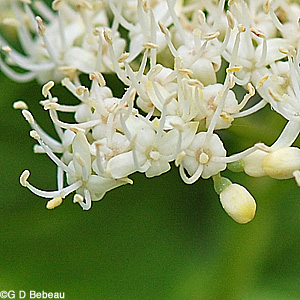 Above: Flower clusters form with the new leaf cluster from the terminal bud of last years twigs. The flowers are 4-parted with white petals and a short calyx.

Below: Large older specimens of Pagoda Dogwood can be quite impressive with multiple flower clusters on many new branches. A tree like that shown achieves great size and the typical "pagoda" shape when not crowded by other plants and gets full sun most of the day. Understory specimens usually remain as shrubs.

Below: Early season green fruit just 6 weeks after the buds breaking and the dark blue fruit of early August with its red stems. 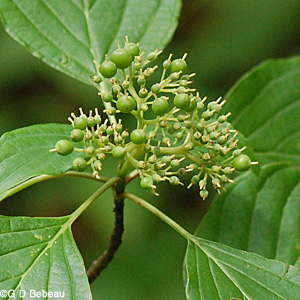 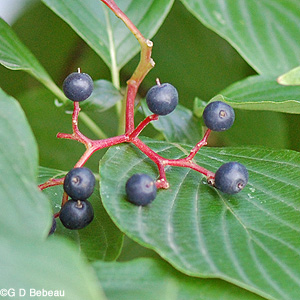 Below: 1st & 2nd photos - Twigs are reddish color. Note that the flower buds appear with the developing leaves. 3rd photo - Younger stems have a dark greenish color with vertical streaks which become fissures as the stem grows older and thicker. 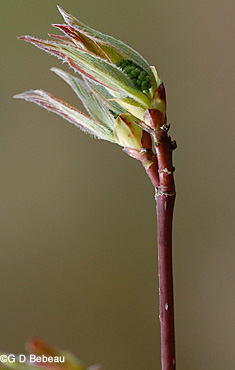 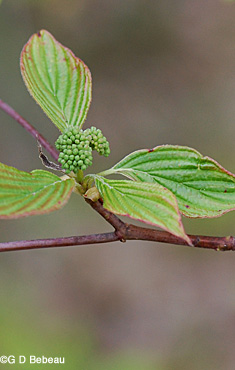 Below: Two views of terminal buds. Note the fine hair on the scale edges in the 2nd photo and the 3 scales. 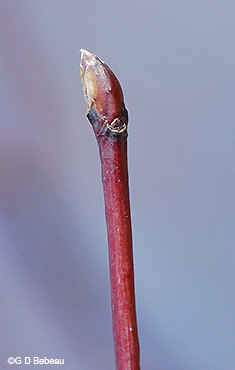 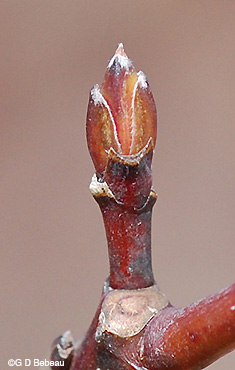 Below: The upper and under surface of the leaf. Margins are usually entire and smooth,but wavy. Many fine hair on the underside creating a pale color. 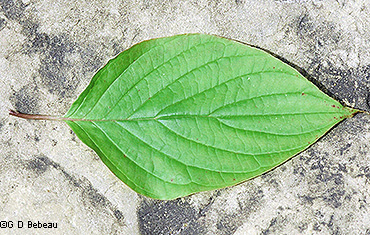 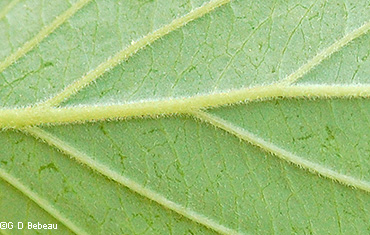 Below: This is the upper section of very nice specimen of Pagoda Dogwood.

Comparison of 4 Dogwoods at Eloise Butler

Notes: Pagoda Dogwood is indigenous to the Garden area. Eloise Butler catalogued it on April 29, 1907. Additional plantings were made by Gardener Cary George in 1987. It is native to Minnesota and fairly well distributed except for counties in the SW quadrant and the Arrowhead. Its North American range is the eastern half of the continent. It is frequently grown as a garden specimen and is readily available in the nursery trade.

There are 6 native dogwoods of the Cornus genus found in Minnesota. In addition to the 4 in the Garden, detailed in the table above, there are Bunchberry Dogwood, C. canadensis; and Round-leaf Dogwood, C. rugosa, both of which are historical but indigenous to the Garden.