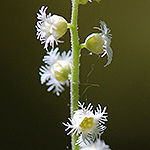 Leaves are of two types - basal and stem. Basal leaves are long stalked, heart shaped at the base, broadly ovate, 3 to 5 lobed with scattered hair on both sides and dentate edges on the lobes. The flowering stem leaves are a pair of similar shape, slightly smaller and with very short stalks or no stalk. They are usually opposite but can be slightly offset from each other.

The inflorescence is a vertical spike (a raceme) of very small stalked flowers at the top of the stem, with most flowers widely spaced. The flowering stem is hairy with glandular hairs.

The flowers have a bell shaped hairy calyx, 2-3.4 mm wide, green to yellowish-green, with five short lobes. The corolla has five white petals that are lobed or fringed and are said to resemble a snowflake. When the flower is closed after fertilization it is said to resemble a bishop's cap. There are 10 stamens with yellow anthers that are placed opposite and alternate with the the five sepals. They have white filaments and yellow anthers. There are two divergent styles from a greenish globular ovary. The stalk of the flower is very short and hairy.

Seed: Fertilized flowers produce a slightly flattened seed capsule that opens at the top to release its small reddish-brown to black tear-drop shaped seeds. If planting seeds, they must be kept moist until planting. They also require a warm moist period of up to 90 days followed by a cold moist period of the same length of time. Easiest to sow outside and wait a year.

Habitat: Twoleaf Miterwort is a woodland plant that likes dappled sunlight in the spring and tolerates more shady conditions later. It likes moist soils in marshes, open woods, ravines and forests - wet mesic to dry mesic. It does not produce stolons as some other Mitella species do. In the Garden you may see these plants any time between mid-May and the end of June.

Names: The genus Mitella, is derived from the Greek mitra, meaning 'mitre or cap' which the seed head resembles. The species diphylla, is from the Greek di, meaning 'two' and phyllon, meaning 'leaf', and referring to the two leaves of the flowering stem. The author name for the plant classification, 'L.' is for Carl Linnaeus (1707-1778), Swedish botanist and the developer of the binomial nomenclature of modern taxonomy. 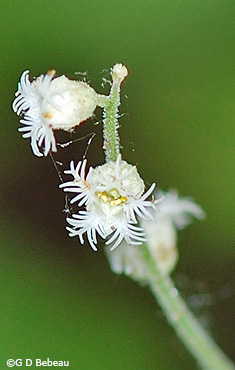 Below: 1st photo - The 10 stamens have yellow anthers and are placed opposite each petal and between (alternate with) each petal. 2nd photo - The fringed petals reflex when the flower opens. The calyx is greenish-white, hairy and has five triangular spreading lobes. The raceme stalk is glandular hairy. 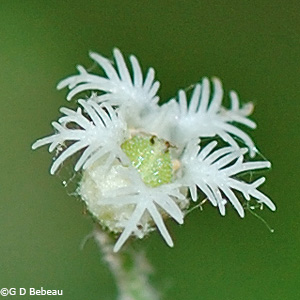 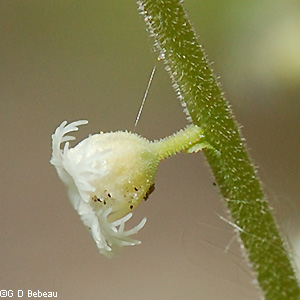 Below: 1st photo - The pair of stem leaves below the flower raceme. 2nd photo - The long-stalked basal leaf with heart shaped base. 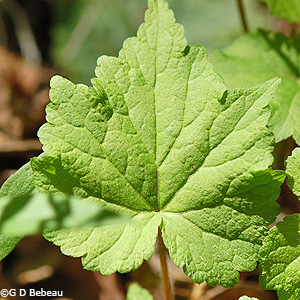 Below: 1st photo: Inside the corolla throat are a pair of styles and 10 stamens with yellow anthers. 2nd Photo: The black tear-drop shaped seeds. Looking down on the capsule you can visualize it in the closed position where it would resemble a bishops miter. Photo courtesy Chris Noll, Wisconsin Flora. 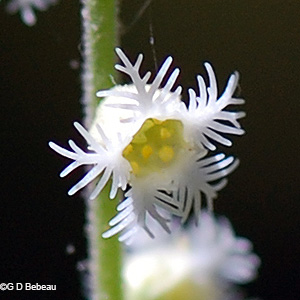 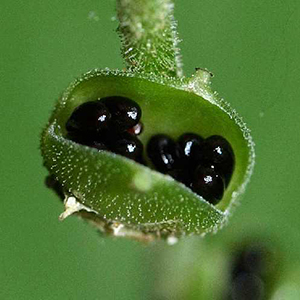 Notes: Eloise Butler noted introducing Twoleaf Miterwort on Sept. 4, 1909 from specimens she brought back to Minneapolis from Appleton Maine while on her summer visit to the East Coast; again on April 13, 1910 with plants obtained in Groveland Park (local) and 5 more clumps from there in Sept. 1917; and on April 14, 1914 with plants obtained from the grounds of the Catholic Seminary in St. Paul. Additional plants in 1917, '23, and '26. Martha Crone noted it in bloom in 1939 and planted it in 1953. She also listed it on her 1951 inventory of plants in the Garden at that time along with the Naked Miterwort (M. nuda) which is the species Eloise Butler listed as present in the Garden area on her original indigenous list of May 25, 1907.

M. nuda does not have stem leaves and usually produces stolons. M. diphylla is native to Minnesota in counties that are along the eastern border of the State, except the far NE. This is the westward extent of the plants range in the United States. M. nuda, which is no longer extant in the Garden, has more of a northern presence in the State and in most of Canada. These two species are the only representatives of Mitella in Minnesota. There are nine species of Mitella in North America. Susan Wilkins planted M. diphylla in 2009 and 2012.