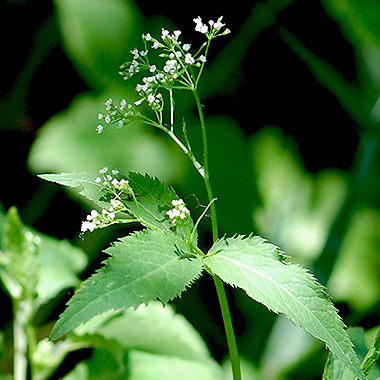 Canadian Honewort is a native erect perennial, with smooth stems, branching in the upper part, and growing from 1 to 3 feet high. Stems are often hollow.

Leaves are 3-parted with sharp but irregular teeth, often double-toothed as shown in the photo below. Leaflet tips are sharp pointed; bases are more wedge shaped. Each leaflet has a short stalk and the lower plant leaves are on long stalks. Leaf stalks form a sheath at the stem. Each leaflet has a center rib with laterals forming a branched network. Leaf surfaces are usually without hair. The leaf is up to 6 inches long and up to 4 inches wide with each leaflet up to 4 inches long and 2 inches wide - the largest being the more basal leaves, which may develop shallow lobes on the leaflets. Upper ones decrease in size and have short or no stalks.

The inflorescence is a compound umbel about 2 inches wide with each umbellet having 2 to 10 flowers, with the group of umbellets forming a cone-shaped panicle. The umbels are at the tip of the main stem and from the upper leaf axils; the axillary clusters are on long stalks held above the leaf from that axil but the leaf is longer that than the cluster. Each umbellet has a subgrouping of flowers on stalks of various lengths such that the umbellet resembles a small panicle. The normal floral bracts of the carrot family are either missing or reduced to one in the umbel.

Flowers are white, 5-parted, only 1/8 inch wide, with petals obovate in shape with tips rounded or with an abrupt point, the tip frequently curls inward. There are 5 stamens, widely spaced, with yellowish anthers; 2 styles; both styles and anthers exserted from the corolla throat. The ovary is of 2 carpels. Sepals are absent or reduced to small scales, leaving the green calyx short and tubular.

Seed: Flowers produce a dry seed known as a schizocarp. These are 4 to 7 mm long, oblong, ribbed and blackish at maturity. They will split into two pieces called mericarps, which each contain a seed. Seeds need at least 60 days of moist stratification for germination.

Habitat: Canadian Honewort has fibrous roots with a taproot. If forms colonies by re-seeding. It grows in full shade to dappled sun - no direct sun. Moisture conditions can be from moist, such as bottomlands, to dry-mesic such as dry woods.

Names: An older name for this plant is Deringa canadensis. The genus name Cryptotaenia is derived from the Greek krypto, meaning "to hide" and taenia meaning a "band" or a "ribbon" - together thought to refer to the oil tubes hidden in the schizocarp. The species name canadensis means of or from Canada. The common name of "honewort" refers to a plant that has medicinal qualities (the "wort" part) but "hone" is of unknown origin making it unclear what was supposed to be treated by using the plant. The standard references for Native American usage do not list the plant.

The author names for the plant classification are twofold: First to classify was '(L.)' which refers to Carl Linnaeus (1707-1778), Swedish botanist and the developer of the binomial nomenclature of modern taxonomy. His work was amended in 1829 by ‘DC’ which is for Augustin Pyramus de Candolle (1778-1841), Swiss botanist, who influenced Charles Darwin. He studied plants, began a systematic catalogue and has 2 genera named for him.

Similar plant or comparisons:. Two woodland plants that have compound umbels and schizocarps for seeds are Anise Root (Osmorhiza longistylis) and Bland Sweet Cicely (Osmorhiza claytonii) but in each of those the leaves have more than 3 compound parts, the umbellets are more flattened, not with a panicle shape, the umbellets have floral bracts and the petals do not turn inward.) 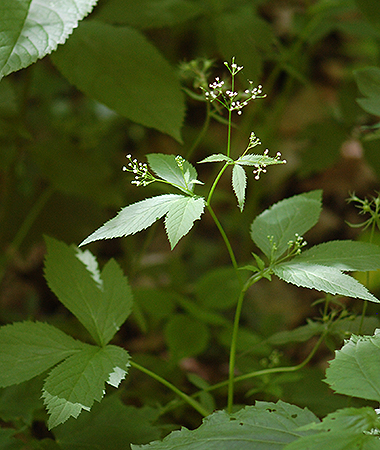 Above: 1st photo - The complete inflorescence rises above the leaves. It is composed on 3 to 10 umbellets containing just a few 1/8 inch white flowers. Extra clusters arise from the upper leaf axils but the cluster is not as long as the leaf is. 2nd photo - One branch of the inflorescence rising from a leaf axil. The upper stem leaves are 3 simple leaflets.

Below: The white flowers lack visible sepals. The five petals usually turn inward at the tips. Five stamens and two styles are exserted from the corolla. There are no floral bracts. 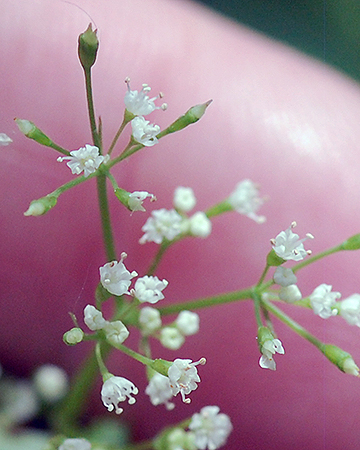 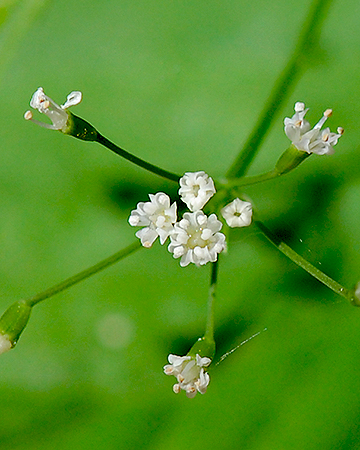 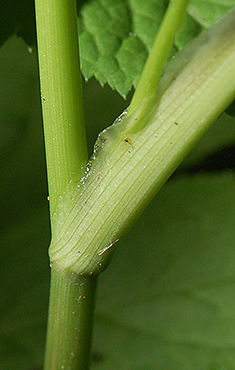 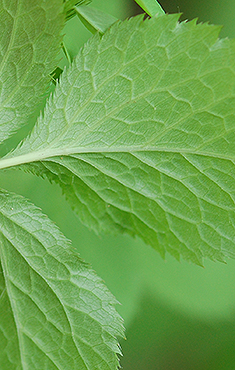 Below: Drawing from Britton, N.L., and A. Brown. 1913. An illustrated flora of the northern United States, Canada and the British Possessions. 3 vols. Charles Scribner's Sons, New York. On the right is shown the schizocarp which splits into two mericarps.

Below: Seeds of Canadian Honewort. The schizocarps split into to pieces, called mericarps. 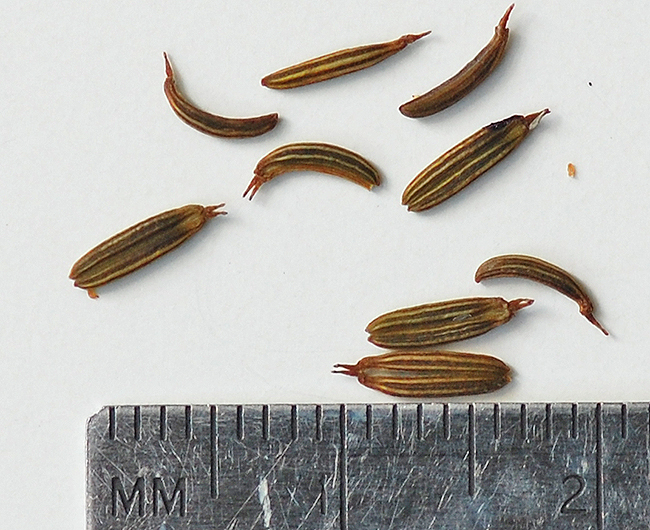 Below: One of the large basal stem leaves showing each of the 3 leaflets with lobes - the terminal leaflet with 3 lobes. 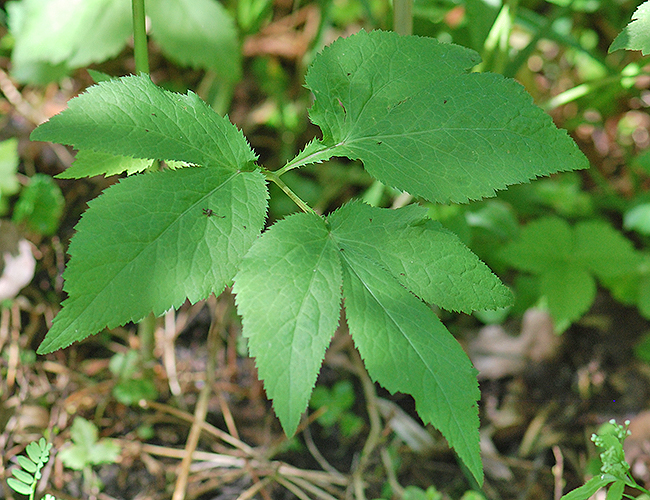 Notes: Honewort is indigenous to the Wildflower Garden - Eloise Butler noted it in May 1907. Martha Crone noted it in bloom in 1939 and 1940 and it appeared on her 1951 census. It has wide distribution in Minnesota with the counties not reporting it more concentrated on the Western side of the state, but it is found along the border with both Dakotas. In North America, the range is from Manitoba south to Texas and then eastward.

Honewort has edible parts. The root can be prepared like parsnips and the leaves can be eaten raw like parsley or steamed as a vegetable. Seeds can be used for flavoring.