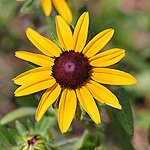 Black-eyed Susan is a coneflower, named for the central blackish-brown disc cone. Plants can be a short lived perennial, a biennial, or an annual. The text here describes var. pulcherrima, the variety native to Minnesota, which grows as a biennial or a perennial.

Stems grow erect to 3 feet high, are green, some with purplish spotting, and quite hairy, sparingly branched, if at all, above mid-stem height, but there may be multiple stems from the root crown.

Leaves: The more basal leaves are lance-like in shape, up to 1 inch wide and 3 to 5 times as long and stalked. Basal leaves usually wither away at flowering time. The stem leaves are more broadly linear or spatula shaped, alternate, may have slight teeth or are entire, but are rough on both sides with white bristly hair; the leaf margin and the underside veins with longer hair. The upper surface is a medium to dark green with a much paler underside. They may have short stalks lower on the stem and become stalkless toward the top of the stem.

The floral array is a solitary long-stalked flower head, the stalk frequently 1/3 the total plant height.

The flowers have heads 2 to 4 inches wide with a central slightly flattened domed disc 1/2 to 3/4 inch wide that is composed of numerous disc florets which are the fertile florets. These have tubular corollas that are yellow-green at the base but brownish-purple at the top where the five lobes of the corolla have rounded to pointed tips. The two branches of the single style have pointed tips. Five stamens surround the style. Disc florets open from the outer perimeter to the center. The yellow ray florets around the perimeter are sterile and will number 8 to 21. These sometimes have a maroon splotch at the base of the ray and tips have 2 to 3 small teeth. Around the outside of the flower head are 2 series of green phyllaries that are linear in shape, quite long, and like the flower stalk are very hairy. The outer ones reflex while the shorter inner ones simply spread.

Seed: Fertile disc florets form a dry black seed (a cypsela), 1.5–2.7 mm long, that does not have any fluffy pappus attached. Seeds are dispersed simply by wind shaking the stem. Seeds require 30 days of cold stratification for germination.

Habitat: Black-eyed Susan is the first coneflower to seasonally bloom in the Upland Garden where bloom can continue until frost. It grows from a tap-rooted root system in sandy to loamy soils; moisture requirements are quite tolerant - wet-mesic to dry; full sun for best bloom, weaker stem plants in partial sun. Reproduction is entirely by re-seeding.

Names: The scientific name is sometimes found with numerous variant listings such as R. hirta L. var. serotina. All have recently been consolidated into the four Rudbeckia hirta series as outlined in Flora of North America (Ref.#W7) and summarized above. The genus name, Rudbeckia, is named after the Swedish father and son, O. J. and O. O. Rudbeck, who were professors of botany and predecessors of Linnaeus. The species, hirta, refers to the roughness of the hair on the leaves and stem. The author name for the plant classification, 'L.', refers to Carl Linnaeus (1707-1778), Swedish botanist and the developer of the binomial nomenclature of modern taxonomy.

Comparisons: R. hirta, being so geographically widespread, has many variations in the amount of hair and the color of the ray flowers, depending on local ecotypes. Many native plant nurseries also sell a similar plant - Orange Coneflower - Rudbeckia fulgida, which has a shorter stature, spreading stem branches and a root system with stolons allowing it to spread vegetatively. The native plant market also offers a longer lived version known as Sweet Black-eyed Susan, Rudbeckia subtomentosa. It grows taller, has more flower heads in panicle arrays, larger leaves with 3 to 5 lobes, and has much shorter rough hair on stem and leaves. Then there is the Thin-leaved Coneflower, R. triloba, where the stem leaves are 'thin', ovate to elliptic, with 3 to 5 lobes. Photos of all three below. 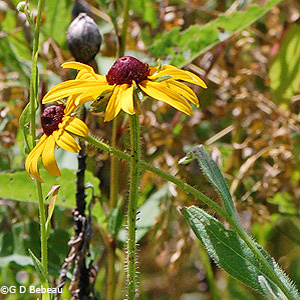 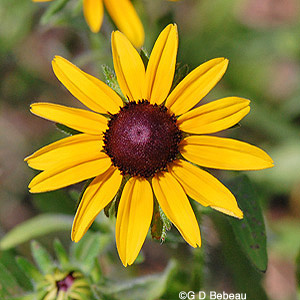 Above: A fully developed flower head with the fertile disc florets formed around the central done of the disc. 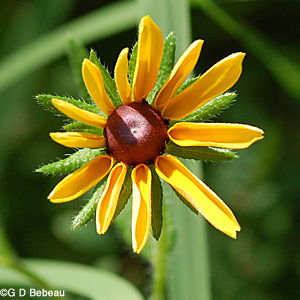 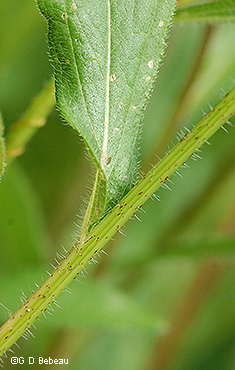 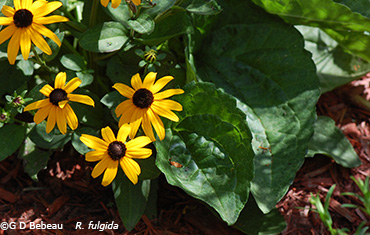 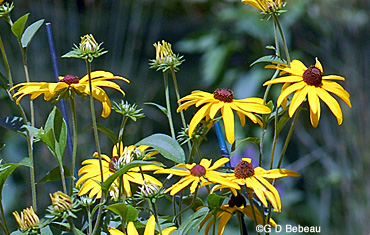 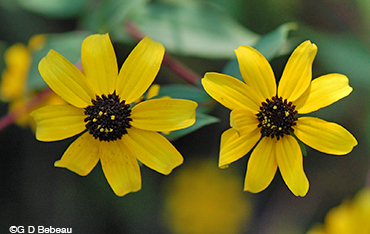 Below: 1st photo - Stem leaf of R. hirta, compare to the basal leaf shown above. Both the lance-like leaves and the stem have rough hair. The leaf surfaces of R. hirta. 2nd photo - underside; 3rd photo - upper side. 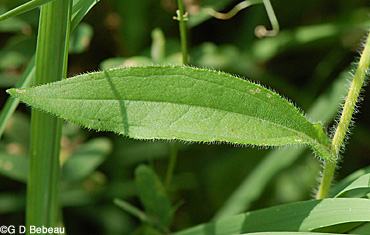 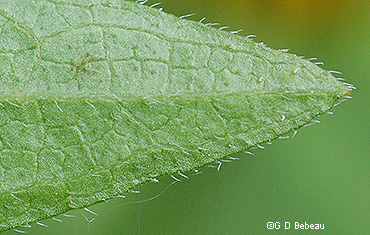 Below: Waves of Black-eyed Susan in the 2007-2009 prairie restoration area of the Upland Garden. Photo © Phoebe Waugh. Blooms begin in early July and continue into Autumn, sometimes as late as mid-October, frost permitting.

Notes: Black-eyed Susan is indigenous to the Garden area. Eloise Butler catalogued it on Sept. 6, 1907, and planted it in 1928. Martha Crone planted 33 plants in 1945 and more in 1946, '48, and '55 and sowed seeds in 1953. Black-eyed Susan is native to Minnesota and found generally throughout the state except some counties in the SW. It has been replanted numerous times, most recently in the Upland Prairie restoration area shown above. In North America it is found in 46 of the lower 48 States and most of the Canadian Provinces except the far north.

Four species of Rudbeckia are considered native to Minnesota: R. laciniata, Green-headed (or Tall) Coneflower; R. hirta, Black-eyed Susan; R. triloba, Three-leaved (or Thin-leaved) Coneflower; and R. subtomentosa, Sweet Coneflower, (Sweet Black-eyed Susan) although the latter is considered either an introduction or an extension of its normal range from Iowa and southern Wisconsin, as there is only one known population in the wild, in Mower County. The nursery trade has produced cultivars of Green-headed Coneflower, known commercially as Golden-glow, which occasionally escapes from cultivation.

Monet grew certain varieties of R. hirta in his large garden at Giverny. (Ref. 36A)

Eloise Butler wrote of this plant: "Troops of Black-eyed Susans boldly stare at roamers over the hillsides. As we return Susan’s unblinking gaze we see that her eyes are a velvety, purplish brown instead of black. This coneflower, Rudbeckia hirta, is a composite. The “eye” is made up of many small, tubular flowers, and each yellow eyelash is also a flower." Published in the Minneapolis Sunday Tribune July 16, 1911