Friends of the Wild Flower Garden 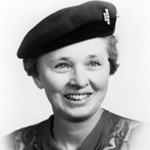 During Martha Crone’s tenure as Garden Curator, she made annual reports to the Board of Park Commissioners. These were brief, usually one typed page, and she set out what she considered to be the major highlights of the year. She usually mentioned the climate of that year, specific bloom highlights, the quantity and type of plants set out that year, brief comments on Garden visitor levels and how the Garden fills in a most useful function of education and relaxation. Finally, it was her opportunity to communicate what she considered pressing needs that the Park Board could fulfill. As she was expected to be at the Garden six days per week, all season, these reports were really her major opportunity to speak to Park Management. There was no telephone in the Garden until two years before her retirement.

Here, for most years, is a culled list of highlights taken from Martha’s reports. The link on the year number takes you to a full year history.

1933: Martha completed the work started by Eloise Butler of planting the area around the Mallard Pool. (Fig 1)
1934: Very cold April, ice on the ponds yet on the 27th. Dedication of the Butler memorial tablet on May 4. Martha reports a large increase in the number of bird students visiting the Garden as the Garden was becoming known as a sanctuary for birds. Also Dr. Thomas Roberts (author of the two volume 1932 work Birds of Minnesota had donated a set of colored bird engravings which Martha displayed on the walls of the “cabin” as she termed the little office building. These were a hit with visitors. She brought in a large number of Fringed Gentian and was experimenting with growing them from seed as the plant is biennial.
1935: A year of ample moisture after the long drought of the early 1930s. Planted 36 small Kentucky Coffee Trees. A number of these still grow along the west path of the Woodland Garden between guidebook stations 10 and 14. 1,019 plants set in. Large "Hen of the Woods" found. Martha and Gertrude Cram are robbed in the Garden.
1936: Deep snow on opening day. Drought returns in the summer. No rain mid June to August 15. Hottest July on record. Twenty six bird houses were set out plus 682 plants despite the heat.
1937: A year of adequate moisture. Martha sets out close to 1000 new plants to replace those lost to drought, and a large clump of rare Ram’s-head Lady’s-Slipper (Cypripedium arietinum), transplanted by Martha in 1936, bloomed beautifully. She states the need for an adequate fence for the garden as the old one is run down.
1938: A new fence is installed around part of the Garden by a WPA crew (Details). Large groups of school children are bused in from the public schools. She requests that the Garden should remain open at least until October 15th, so visitors can enjoy the fall blooms and foliage. Up to now, the Garden has always closed on September 30th.

1939: Martha mentions that restoration work was done on The Great Medicine Spring, just outside the Garden, and that a spring has been tapped in the Woodland Garden on the west shore of the open pool in the wetland and that it supplies a good flow of water. (Note: Over the years this pool at the north end of the Garden would fill with silt. It was renovated in 1992 but has silted in again. For the first time, the Garden closing date is extended to October 15th.

1940: Martha reports that six varieties of Lady’s-slipper bloomed in the Garden, The oldest tree in the Garden, a giant white oak named "Monarch," estimated to be 700 years old, was removed as it had become a hazard.

1942: Like 1941, this was another year of abundant moisture. On May 24th, a Sunday, 5,000 visitors came to the Garden, following the publication of an illustrated article in the Minneapolis Tribune.

1944: She reports what a pest Jewell-weed (fig. 3) has become and that a program for removal has to be started. The new Upland Garden addition becomes reality. (see separate paragraph on that in the main article on Martha Crone). Hummingbirds are in abundance around the office where vials of sugar water had been set out.

1945: Martha sets out 4,000 new plants in the new prairie area, including bringing in some native soil to support a few of them. Two thousand feet of new paths are made. (Fig. 4) A Jewell-weed removal program was completed to restrict the pest to just a few spots.

1946: A new corduory path is made which winds through the wetland (the boardwalk today closely follows that route). (Fig. 5). She notes the great effort provided by Clinton Odell in helping the Garden. 8,343 new plants were set out.

1947: Lady’s-Slipper are down to four species. A city water system, connecting at Chestnut and Xerxes, was brought into the Upland Garden to supplement the natural supply. It would be 1964 before the supply was extended to the Woodland Garden. Martha had three new pools in the wetland dug out. The Garden's season is extended till the end of October from October 15.

1948: She sets out 8,003 new plants and is thankful for the city water supply as this was a dry year. The pools dug in 1947 were enlarged so more aquatic plants could be introduced and visitors could see the pools close-up from the new bog path. Gardener Ken Avery reported several times in the early 1960s the need to dig them out. Eventually, they were left to silt in and today those pools do not hold open water, although the outlines are probably still there.

1950: Martha introduces the first informational Garden Brochure for visitorsa. She begins to put together a set of color slides of Garden plants that she could use for illustrated lectures about the Garden. The set eventually comprises 4,000 slides.

1951: She adds another 500 slides to her lecture collection and gives an illustrated lecture to 12 different groups - 629 people. A request for a telephone is made to the Park Board. This request was not fulfilled until 1957. A Garden history and plant census is completed and sold for 10 cents to visitors. The plant list was compiled in plant family arrangement. The list contained 787 species of forbs, ferns, shrubs and trees, excluding grasses, sedges, mosses, fungi, etc. This was the first census since the botany teachers original 1907 survey of the Garden and involved a tremendous amount of effort. Early users requested an index. Non-botanists might know the common name or even the scientific name, but probably not the plant family. Martha added the index in 1952.

1952: She references the success of a new "Self Conducted Tour" brochure with 10,000 distributed in 1952. More slides are added as Martha has decided the set should contain one on every wild flower in the Garden. She notes the Formation of Friends of the Wild Flower Garden, Inc. and the continuing work of Clinton Odell. Lectures given to 27 groups - 1,606 people.

1954: She refers again to the need for continued help in the Garden, as development is neglected without more work time. Ken Avery is hired as her assistant. The dam at the end of the pool at the north end of the Garden (fig 6.) sustained some kind of upheaval damage and she requests repair help. This was the concrete dam of Eloise Butler, build in 1917 in place of her earlier earthen dam. She lectures to 16 groups - 1,006 persons and receives an award of merit from the Minnesota Horticultural Society.

1955: The season begins with the discovery that the office had been broken into during March. (Fig. 7) The Friends of the Wild Flower Garden receive a substantial gift from the Minnetonka Garden Club which Martha will use to create a fern glen in an undeveloped part of the Upland Garden. The dam problem has not been fixed. (Fig. 6). Lectures given to 24 groups - 1,302 persons.

1956: She begins work on the Fern Glen, setting out 2,160 ferns. Although a foot of snow covered the Garden on April 1st, the growing season proved to be one of the longest as there was no further frost until late October. A subsequent lack of snow caused much plant loss in the Garden the next year. She again requests a telephone for the Garden. Martha was awarded a Bronze Medal for achievement in horticulture from the Minnesota State Horticultural Society. Lectures are given to 14 groups - 720 persons.

1958: The Fern Glen project ends up with 2,843 plants set out, all purchased for the $775 received from the Minnetonka Garden Club and The Little Minnetonka Garden Club. She notes the death of Clinton Odell on June 4th. Her tally on plants set out in the Garden during the last 12 years is 40,999. Lectures given to 13 groups in 1958. This is her last report to the Board of Park Commissioners.

Reference:
Annual Report of the Garden Curator to the Superintendent of Parks (until 1945) thereafter to The Board of Park Commissioners. 1933 to 1958. Martha Crone Collection. Minnesota Historical Society. Historical color photos of the Garden from Kodachromes taken by Martha Crone. After her death in 1989 her daughter Janet, passed the collection to the Friends via Friends member Martha Hellander who was in the process of researching a book about Eloise Butler. The Friends sorted the collection and then for a short time, used them at lectures about the Garden. Some of those images are shown on this page. Other photos ©G D Bebeau

Then and Now in the Garden - photo history