by Eloise Butler, from Annals of the Wild Life Reserve

[Note: Since Eloise Butler's time, the scientific names of plants and the classification of plant families has undergone extensive revision. In brackets within the text, have been added when necessary, the revised scientific name for the references she used in her article. Nomenclature is based on the latest published information from Flora of North America (Ref.#W7) and the Checklist of the Vascular Flora of Minnesota (Ref.#28C). Other information in brackets may add clarification to what she is saying. The unusual opening line is explained at bottom of the page.]

Mrs. Keeler’s paper leads me to write about our ferns. Minnesota is not as rich in ferns as New York and a single county would not yield as many species as she names. [Harriet L. Keeler was an early 20th Century writer on New York State plants]

Ten ferns are indigenous to the wild garden. Indeed, the most spectacular feature of the garden is a hillside densely clothed with the Interrupted Fern, Osmunda clintoniana, [now Osmunda claytoniana] and the tamarack swamp abounds with Cinnamon fern, O. cinnamomea and the lovely evergreens, Aspidium spinulosum and A. cristatum, [Wood Ferns] with the second in point of numbers -- the Marsh Fern, A. thelypteris [Thelypteris palustris], which is also massed in the marsh on the eastern side of the swamp.

We also have an abundance of Lady Fern, Asplenium filix-femina [Athyrium filix-femina]; Sensitive Fern, Onoclea sensibilis; and Maidenhair, Adiantum pedatum, which forms mats of unusual size and height. The Rattlesnake Fern, Botrychium virginianum, is frequent, and the Brake, Pteris aquilina [Pteridium aquilinum], is rapidly spreading, although when the garden started in 1907 it was not in evidence and I recall that three of the teachers of botany tried and failed to dig up a root of it to transplant in the garden. This may repeat the history of the Royal Fern, Osmunda regalis, which has been introduced on the border of the swamp. Much to my surprise I found a single specimen, [Sept 29, 1914] not large, but beyond the period of childhood, in the center of the swamp where it had not been consciously planted. The query is, how did it get there? Possibly in the sod from some other plantation, for it is too soon for it to develop from the spores of the introduced specimens. The fern is abundant in a thicket about two and one-half miles from the garden.

The other ferns that grow about Minneapolis and have been introduced in numbers in the garden are the Ostrich Fern, Onoclea struthiopteris [Matteuccia struthiopteris], which is locally abundant in moist ravines. In one place, I have been told, fronds grow six feet high; Cystopteris bulbifera [Bladder Fern] with very long fronds on moist, rocky banks, and the less frequent Fragile Bladder Fern, C. fragilis; Common Polypody, Polypodium vulgare [Polypodium virginianum] on the bluffs of the Mississippi. I know of one limestone bluff that is carpeted with it and close by another that has an equally rank growth of Woodsia obtusa [Blunt-lobe Cliff Fern]. On our river bluffs is also found perhaps the most interesting fern of all, Cryptogramma stelleri, the Slender Rock Brake, differentiated, small as it is, into two sorts of fronds, the sterile and fertile.

I have had to go several miles farther afield, a journey by rail farther south along the river, for the Purple Cliff Brake, Pellaea atropurpurea, where I find it abundant in crevices of bold, out cropping rock; and my nearest point for the Walking Fern, Camptosorus rhizophyllus [Asplenium rhizophyllum], is over the border in Osceola, Wisconsin. Here, too, I have obtained the pretty Oak Fern, Phegopteris dryopteria [Gymnocarpium dryopteris] and Woodsia ilvensis [Rusty Woodsia]. For the other beech ferns, P. polypodioides and P. hexagonoptera, I have had to depend upon florists. I find that P. hexagonoptera prefers a shady hillside, while the two other beech ferns do well in the swamp. 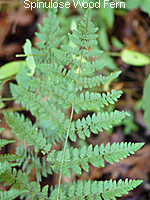 Colorado has furnished me with the little Woodsia scopulina [Rocky Mountain Woodsia] and I have myself successfully transported from Malden and Franklin, Mass., the Christmas Fern, Polystichum acrostichoides; the Marginal Shield Fern, Aspidium marginale [Dryopteris marginalis]; and the precious Ebony Spleenwort, Asplenium platyneuron -- the last three evergreen, especially to be commended. The thick, blue-green fronds of Aspidium marginale persist each season until after the new leaves are formed, doing duty the whole year round.

All my ferns are prospering except Pellaea atropurpurea and Asplenium trichomanes, which require renewing.

To complete the flora I still need:

I have not succeeded in naturalizing lycopodiums. Conditions do not seem favorable. They live a season or two and then peter out. One specimen of Lycopodium lucidulum [Huperzia lucidula - Shining Clubmoss] was found growing naturally in the swamp [1908] but it has disappeared. However, a large mat of transplanted Selaginella rupestris [Northern Selaginella] is completing its third year in the garden. Neither have I one snippet of Isoetes [Quillworts] (of which there are three species in Minnesota); nor Salvinai natans [Floating Watermoss], nor Azolla caroliniana [Carolina Mosquitofern], both of which are listed in our flora.

Note: The ferns pictured in this article have an information sheet, with photos and descriptions, posted on this website. Use these links to locate them: Common Name List - Scientific Name List.

In 1919 Eloise wrote a very similar article, which we also believe was to be published in the Asa Gray Bulletin. Read it here.