by Eloise Butler, from The Wild Botanic Garden, 1911 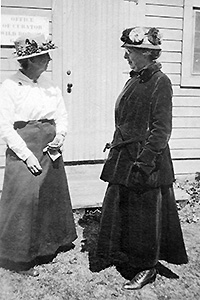 While I am about it, although destroying the literary unity of my paper – but where may one not ramble, if not in a wild garden? – I will give . . . a more complete idea of how we have fought, bled and nearly died for the cause by recounting another adventure that might really be called a hair-breath escape: I took two boys to the Wild Garden to help clear up the fallen brushwood and to put the place in order for the spring awakening. I was working some distance from them. Going near them to direct their work, I was astounded by their running to me, shouting at the top of their voices and beating me excitedly over the head. Do not form a hasty conclusion: They were young gentlemen and what they did was perfectly right and proper. I had been attending to the burning of the brush. In some way a spark had kindled on the top of my hat, and I had been moving serenely about, emitting flames and smoke, like a small volcano, while a crater was forming in the crown of my hat. I had been wondering all the while at the peculiar odor of the burning brush and supposing, when blinded and choked by the smoke, that the wind had veered since the starting of the fire.

If the boys had not been at hand, the accident might have been serious. As it was, my hat was a charred ruin and my hair, which I could ill afford to lose, was about one-quarter burned away. Some visitors came into the garden during the afternoon, but I sent every one home and waited alone until it was dusk, skewering my hat together with safety pins and filling up the hole in the crown with a big rose that had survived the fire. I hoped that in the crowd [on the streetcar] and darkness, my peculiar head-gear would pass unnoticed.