Friends of the Wild Flower Garden

Eloise Butler wrote “The site of the Wild Garden was chosen particularly on account of the tamarack swamp and adjacent meadows which contained several interesting or beautiful plants that were not to be found elsewhere in the vicinity of Minneapolis.” (1)

The Tamarack, or Larch (Larix laricina) is truly a beautiful tree. It is our only deciduous conifer. When the new needles come out in the Spring, former Gardener Cary George said, "I think the sea foam green needles in the spring and their golden hue in the fall are one of the prime visual delights of the Garden.” (2)

Tamarack is found in wet to moist poorly drained soils in cold climates. It is not tolerant of shade and is often the first tree to colonize an open moist area. The root system is very shallow, but broader than the crown, but still makes the tree susceptible to blow-down. Older trees are subject to infestation and defoliation by the Larch sawfly (Pristiphora erichsonii) and by the Larch casebearer moth (Coleophora laricella).

Tree height can reach 40 to 80 feet with a straight trunk, diameter of 1 to 2 feet, but some can be much larger. The national champion Tamarack, as of 2018, is located near Brainerd MN and scores 234 points with a height of 67 feet and a circumference of 150 inches. The crown of the Tamarack is a narrow pyramid. Branches are horizontal to ascending. It self prunes and older trees will be bare for much of the lower trunk.

On June 2, 1925 Eloise noted in her Garden log - “Tornado uprooted many large trees and tore off many tops and branches. Paths shut off and plants laid low with debris of the wreakage.” A year later she added more detail - “The leading tree in the swamp was the tamarack. They were piled up like jackstraws by the tornado, and but few left standing.” (3) Then the saw fly infestation took care of the remainder. It’s not clear if Eloise had the energy to replant any of them but her successor Martha Crone did. Martha started with seven in 1934 that she transplanted from the Quaking Bog, just west of the Garden and then planted more in the years 1935, ’36, ’38, ’48 and ’49. Her successor Ken Avery planted some in 1977 and Susan Wilkins recently planted 30 in 2010.

The Tamarack is primarily a tree of the Canadian boreal forests. Within Minnesota it is found in various counties in the northern 2/3 rds of the state, which includes the metro area. Minnesota is the western most outpost of this species, growing around the Great Lakes and up to New England.

The wood of old trees is very durable, used for framing houses, railroad ties, poles, etc. Early New England ship builders used the roots as "knees" in building small boats. There is also a medicinal use. Francois Michaux wrote this about the early American uses of the tree:

The wood of the American Larch is superior to any species of Pine or Spruce, and unites all the properties which distinguish the European species, being exceedingly strong and singularly durable. In Canada it is considered as among the most valuable timber, and has no fault except its weight. In the District of Maine it is more esteemed than any other resinous wood for the knees of vessels, and is always used for this purpose when proper pieces can be procured. Turpentine is never extracted from it in America, as is done from our native species in Europe. The Larch is justly appreciated in the United States, but it is little employed, because it is rare and may be replaced by several resinous trees which are cheaper and more abundant.(4)

Densmore in her study of the Minnesota Chippewa reports that finely chopped inner bark, fresh or dried, was useful on burns if applied in the morning, then partially washed off at night and renewed. The bark was also said to used for a laxative, a tonic and a diuretic. The active ingredient is a volatile oil that contains pinene, larixine and the ester bornylacetate. (5).

Adaptation to climate change: Studies by the University of Minnesota, the US Forest Service and the Minnesota Department of Natural Resources indicate that by the 2100 there will be a greater than 20% reduction in habitat for Tamarack in Minnesota. Climate change can means warmer and also it can mean wetter. This decrease in habitat conditions for Tamarack will be more noticeable in the western part of the tree's range in Minnesota but still severe in the Northeastern section.(6)

You can enjoy the Tamarack all during the Garden season, from the sea-foam green new leaves until the golden color of the Fall. Visit and see.

Below: Tamaracks in the Garden wetland in Autumn color before leaf drop. 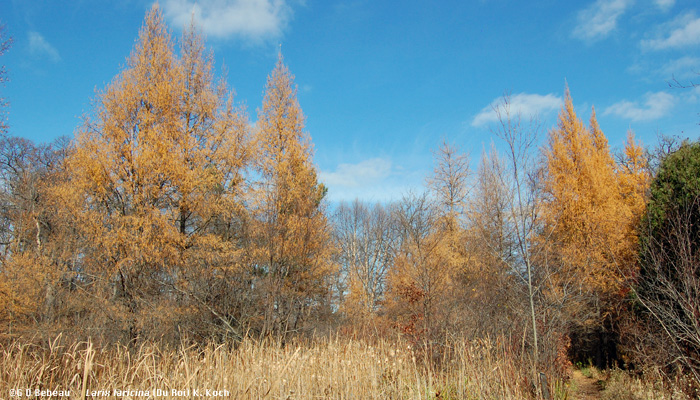 References:
(1) Eloise Butler, Notable Features of my Wild Garden, Annals of the Wild Life Reserve, 1915. Unpublished
(2) The Fringed Gentian™, Vol. 50 #1)
(3) Eloise Butler, Trees in the Wild Garden, 1926, unpublished.
(4) Francois Michaux, The North American Sylva or A Description of the Forest Trees of the United States, Canada and Nova Scotia, Vol. 3, 1819 - 1821.
(5) Densmore, Frances–  How Indians Use Wild Plants for Food, Medicine & Crafts (Note: The contents of this book were originally published in the Forty-fourth Annual Report of the Bureau of American Ethnology to the Secretary of the Smithsonian Institution, 1926-1927)–   Dover –  1973.
(6) Northern Rich Tamarack Swamp (Eastern Basin FPn72) and (Western Basin FPn82). MN DNR. and Climate Change Field Guide for Northern Minnesota Forests, University of Minnesota and US Forest Service.